How to Use Breakout Trading Systems

Explore Book Buy On Amazon
Similar to moving average–based systems, a breakout trading system can take many forms. To test a different approach, you can define a breakout system as follows: These trading rules are loosely based on the rules for Donchian channels (sometimes called price channels), which comprise a breakout system developed by Richard Donchian in the 1950s. Donchian was one of the early developers of trend‐following trading systems.

A spreadsheet may be helpful for evaluating this system. You can, in fact, configure this system into a spreadsheet, include buy and sell signals, and perform analyses to determine how well the system performs. You also can use the spreadsheet to dig into the system’s results to find out what works and what doesn’t. 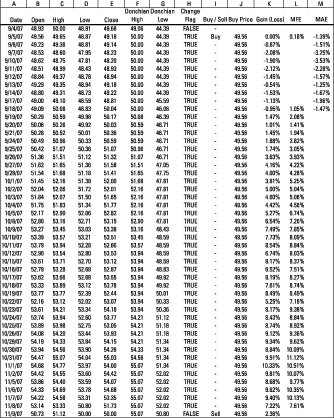 Re‐creating this spreadsheet is straightforward. After downloading the historical price data into a spreadsheet format, all you have to do is encode the formulas into the correct columns.

If you’re like most traders, the first thing you’ll do is calculate some statistics about the system. For example, you can use spreadsheet functions to calculate the following:

You can then look at aggregate results to find out whether the system actually made money. In the case of the Donchian channel breakout system, initial results don’t look promising. The system lost money during the entire test period.

If you’re like most traders, your impulse is to discard the idea and move on to another. But with the Donchian channel breakout system, you need to dig a little further before you do. During the time frame of this test, the system triggered 30 trades, 18 of which were losing trades.

If you look through the last three columns, you’ll notice that this simulated trade was profitable but closed well below its most profitable price. If that happens once during simulated trading, you may not need to worry much about it, but if it occurs frequently, you need to think of ways to remedy the problem.

In the Donchian channels system, buy signals apparently work better than sell signals. Therefore, you need to consider different types of stops and sell signals. One simple idea that’s worth testing is stopping out (selling at a predetermined price) of a position if the stock’s low (instead of its close) falls below the Donchian low. Another is to shorten the time frame for the exit signal by using a five‐ or ten‐day Donchian channel. Or you can, for example, use a trailing stop or some completely different criteria to exit these positions.

Slippage is the term traders use to describe the costs of trading, which is made up of two components. The first is the actual transaction or commission cost for executing your trade. The second is more difficult to measure because it’s the sum of the costs of unfavorable fills. If, for example, you’re planning to buy at tomorrow’s opening price based on today’s closing price, those two prices can be much different. An unfavorable fill is a cost of trading and accounted for as slippage.

Most trading system–development packages have a provision for estimating slippage costs when testing your trading ideas using historical data. If you know your transaction costs, enter the exact amounts. Otherwise, estimate the transaction cost. You probably need to overestimate the cost of unfavorable fills because it always seems to end up being worse in actual trading than most traders ever imagine. You may want to start with an estimate of 25 cents per share and adjust it as you gather data on your actual slippage costs.

Dr. Joe Duarte is a financial ­writer, private investor and trader, and former money manager/president of River Willow Capital Management. In addition to Options Trading For Dummies, he is the author of Trading Futures For Dummies and Market Timing For Dummies. Visit his website at joeduarteinthemoneyoptions.com