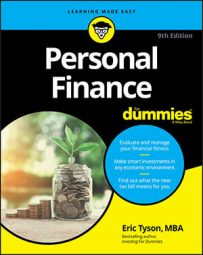 Explore Book Buy On Amazon
The investments discussed here sometimes belong on their own planet (because they’re not an ownership or lending vehicle). Here are the basics on these other common, but odd, investments.

Gold and silver have been used by many civilizations as currency or a medium of exchange. One advantage of precious metals as a currency is that they can’t be debased by the government. With paper currency, such as U.S. dollars, the government can simply print more. This process can lead to the devaluation of a currency and inflation.

Holdings of gold and silver can provide a so-called hedge against inflation. In the late 1970s and early 1980s, inflation rose dramatically in the United States. This largely unexpected rise in inflation depressed stocks and bonds. Gold and silver, however, rose tremendously in value — in fact, more than 500 percent (even after adjusting for inflation) from 1972 to 1980. Such periods are unusual. Precious metals produced decent returns in the 2000s, but, after peaking in 2011, precious metals prices fell steeply.

Over many decades, precious metals tend to be lousy investments. Their rate of return tends to keep up with the rate of inflation but not surpass it.

When you want to invest in precious metals as an inflation hedge, your best option is to do so through mutual funds or exchange-traded funds. Don’t purchase precious metals futures. They’re not investments; they’re short-term gambles on which way gold or silver prices may head over a short period of time. I also recommend staying away from firms and shops that sell coins and bullion (not the soup, but bars of gold or silver). Even if you can find a legitimate firm (not an easy task), the cost of storing and insuring gold and silver is quite costly. You won’t get good value for your money — markups can be substantial.

Investing in bitcoin and other cryptocurrencies

Perhaps you have heard of Bitcoin — the online “currency.” I find that far more young adults know about it than older folks do, which makes sense because it’s a digital currency used for Internet transactions.

Increasingly, Bitcoin has been in the news more and more as its price climbs to ever dizzying higher heights. In December 2017 the price of a Bitcoin neared the $20,000 mark.

So what exactly is Bitcoin? For starters, it’s not actually a coin — that's a marketing gimmick to call it a coin to make it sound like a real currency. Bitcoin and other similar cryptocurrrencies only exist in the online world. Bitcoin’s creators have limited the number of Bitcoins that can be “mined” and put into online circulation to about 21 million.

As its promoters have talked up its usefulness and dizzying rise, many people who have Bitcoins continue to hold onto them in the hopes that the price will keep rising. Like shares of stock in the next Amazon.com or Apple, its owners and promoters are hoping and expecting for further steep price increases. People don’t hoard real currencies with similar pie-in-sky hopes for large investment returns.

Ethereum is the second most popular cryptocurrency as people discover that it allows for incorporating smart contracts, which are computer-based and enforced contracts that delineate specific conditions that must be met in order for the transaction to be completed.

Bitcoin looks attractive, but it comes with many risks and problems. Here are some major issues:

I can’t tell you what will happen to Bitcoin’s price next month, next year, or next decade. But I can tell that it has virtually no inherent value as a digital currency so those paying thousands of dollars for a Bitcoin will eventually be extremely disappointed. With more than 1,500 of these cryptocurrencies, the field keeps growing as creators hope to get in on the ground floor of the next cryptocurrency, which they hope will soar in value.

A recent Wall Street Journal investigation found, “Hundreds of technology firms raising money in the fevered market for cryptocurrencies are using deceptive or even fraudulent tactics to lure investors… . The Wall Street Journal has found 271 with red flags that include plagiarized investor documents, promises of guaranteed returns, and missing or fake executive teams.”

Annuities are a peculiar type of insurance and investment product. They’re a sort of savings-type account with slightly higher yields, and they’re backed by insurance companies. Fixed annuities pay a preset interest rate determined by the insurance company. This rate is typically set one year ahead at a time. Variable annuities’ return varies over time depending on the returns provided by which investment is chosen within the annuity offerings.

As with other types of retirement accounts, money placed in an annuity compounds without taxation until it’s withdrawn. However, unlike most other types of retirement accounts, such as 401(k)s, SEP-IRAs, and 403(b)s, you don’t receive upfront tax breaks on contributions you make to an annuity. Ongoing investment expenses also tend to be much higher than in retirement plan accounts. Therefore, consider an annuity generally only after you fully fund tax-deductible retirement accounts. There’s one other possible personal use for annuities: Those nearing or in retirement with limited resources can insure against the risk of outliving their assets by buying an annuity and annuitizing it — again, at a cost, so proceed carefully.

Notwithstanding the few people who discover on Antiques Roadshow that they own an antique of significant value, collectibles are generally lousy investment vehicles. Dealer markups are enormous, maintenance and protection costs are draining, research is time-consuming, and people’s tastes are quite fickle. All this for returns that, after you factor in the huge markups, rarely keep up with inflation. Furthermore, long-term investment gains (of more than one year) you do earn on collectibles are currently taxed at your ordinary federal income tax rate with a cap of 28 percent, which is higher the rates on than the long-term capital gains tax rate on stocks, real estate, and small business (20 percent) held for a year or more.

Buy collectibles for your love of the object, not for financial gain. Treat collecting as a hobby rather than as an investment. When buying a collectible, try to avoid the big markups by cutting out the middlemen. Buy directly from the artist or producer if you can.

Eric Tyson is an internationally acclaimed and bestselling personal finance book author, syndicated columnist, and speaker. He is also the author of Investing For Dummies, Personal Finance in Your 20s & 30s For Dummies and coauthor of Home Buying Kit For Dummies.