Explore Book Buy On Amazon
Germany has 13 wine regions — 11 regions in the west and 2 regions in the eastern part of the country. German wines are mostly white. They’re fruity in style, low in alcohol, rarely oaked, and often off-dry or sweet. Their labels carry grape names, which is an anomaly in Europe.

Germany is the northernmost major wine-producing country in Europe — its climate is cool. Except in warmer pockets of Germany, red grapes don’t ripen adequately, which is the reason most German wines are white. The climate is also erratic from year to year, meaning that vintages do matter for fine German wines.

Germany’s finest vineyards are situated along rivers such as the Rhine and the Mosel, and on steep, sunny slopes, to temper the extremes of the weather and help the grapes ripen.

Riesling and other grape varieties

Another major, but less distinguished, German variety is Müller-Thurgau, a crossing between the Riesling and Silvaner (or possibly Chasselas) grapes. Its wines are softer than Riesling’s with less character and little potential for greatness.

After Müller-Thurgau and Riesling, the most-planted grapes in Germany are Silvaner, Kerner, Scheurebe, and Ruländer (Pinot Gris). Among Germany’s red grapes, Spätburgunder (Pinot Noir) is the most widely planted, mainly in the warmer parts of the country.

The most famous of Germany's 13 wine regions is the Mosel-Saar-Ruwer region, named for the Mosel River and two of its tributaries, along which the region’s vineyards lie; and the Rheingau region, along the Rhine River. The Rhine River lends its name to three other German wine regions, Rheinhessen, the Pfalz (formerly called the Rheinpfalz), and the tiny Mittelrhein region. 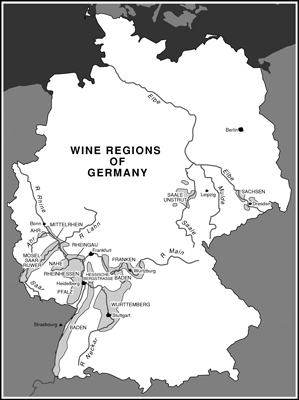