By: James Hinkson and Joe Lombardi and
Updated: 03-26-2016
From The Book: Lacrosse For Dummies 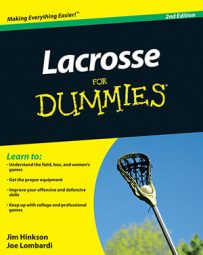 Jim Hinkson has coached at every level of lacrosse, from house league to professional. He has authored five books on lacrosse and coaching. Joe Lombardi is a multimedia journalist and was named man of the year in 2008 by the Lacrosse Coaches Association of the Hudson Valley in New York.