How to Play Pickleball

By: Mo Nard and Reine Steel and Carl Landau and Diana Landau and
Updated: 11-10-2022
From The Book: Pickleball For Dummies 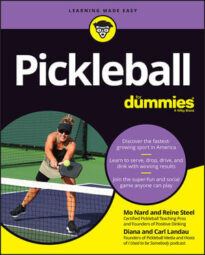 What are the pickleball rules?

An official pickleball rule book currently runs about 75 pages, but you don’t need to commit all that to memory. The rules summary in this article will help you get out on the court and play your first few games today.

Pickleball is a very social sport, so even if you don’t know all the rules yet, there’s probably another player on the court (or three) who are willing to help you. They were all beginners once, too, so don’t be shy!

This article focuses on playing doubles, which is, by far, the most popular format.

Layout of the pickleball court

The pickleball court is laid out the same for both singles and doubles. It’s a rectangle that measures 44 feet long by 20 feet wide. This is the same size as a doubles badminton court, or roughly one third the size of a tennis court.

Along the outside boundaries of the court, you’ll find the sidelines on the long ends and the baselines on the shorter ends. 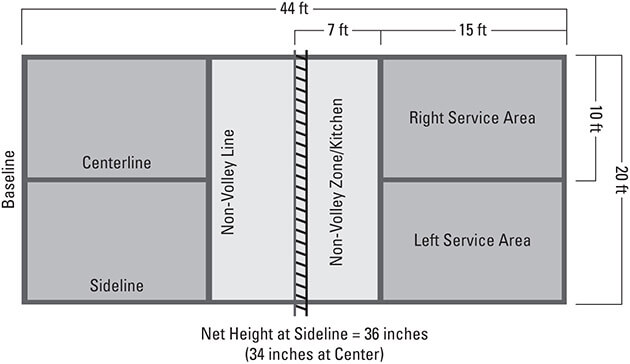 The court is divided in the middle by a net, or as we like to call her, “Annette.” A real heartbreaker, Annette’s measurements are 36-34-36 — she’s 36 inches tall at the sidelines and 34 inches at the center.

Although a pickleball net is actually 2 inches lower than a tennis net, the height relative to the size of the court can make Annette a lot like a bad ex — hard to get over!

On each half of the court is a 7-x-20-foot area directly in front of the net called the non-volley zone (NVZ), more commonly known as the kitchen. As the name non-volley zone implies, players aren’t allowed to hit a volley (a shot hit before the ball has bounced) while in this zone.

Historians aren’t sure how the kitchen got its nickname, but one theory claims that the term was borrowed from shuffleboard.

The court between the kitchen and the baseline is divided lengthwise into two service boxes by the centerline. (Historians haven’t spent any time researching that one.) The line that divides the kitchen from the service boxes is known as the non-volley zone line, or the kitchen line.

How to serve in pickleball

You can’t start playing a game of pickleball until somebody serves the ball. Here are the basic rules you need to know to get started serving:

©John Wiley & Sons, Inc.
The path of a legal serve into the correct service box

After a player serves the ball, the receiver must let the serve bounce before they are allowed to hit it. (Otherwise, the world would be left wondering whether that serve was going to land in bounds.)

When the receiver returns the ball to the serving team, that team must also let it bounce before they can hit. After those first two shots have been allowed to bounce, any player can legally volley, which means to hit the ball out of the air before it bounces.

The two-bounce rule is one of the genius ideas that makes pickleball great. It prevents the “serve-and-volley” strategy commonly used in tennis, keeping players from blasting a huge serve and immediately running up to the net to volley the next ball. For this reason, in pickleball, the serving team is not considered to be at an advantage at the start of each rally.

If you have trouble at first remembering to observe the two-bounce rule, just count the bounces in your head: “One … two … game on!” Another way to think about this rule is that the ball must bounce on each side of the court before players may volley. So, after you’ve watched the ball bounce on your side of the court, either on the serve or return, you can forget worrying about counting those darn bounces.

The server is the only player required to stand in any particular place on the court when the point begins. (Actually, there is a rule stating that you must stand on your own team’s side of the net, but we can’t imagine why you wouldn’t choose to do so).

However, the two-bounce rule clearly influences where the other three players should stand at the start of the point.

Here’s the breakdown for each player:

If you’re not sure where you’re supposed to be standing, remember that all players should ideally stand behind the baseline at the beginning of the point, except for the person standing directly across from the server. Also, remember that when it’s your partner’s turn to serve, they need you back there with them. It’s their big moment! Stay back and support your partner when they’re serving. Only the receiver’s partner should be up at the kitchen line.