Formula One Racing: What Happens during an F1 Pit Stop

By: Jonathan Noble and Mark Hughes and
Updated: 06-23-2022
From The Book: Formula One Racing For Dummies 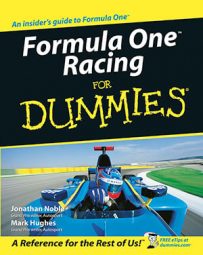 Explore Book Buy On Amazon
Pit stops are one of the most tense and exciting features of a Grand Prix or other formula one auto race. In fact, auto races are frequently won and lost because of the pit stops and pit crews. In just a few seconds a huge number of actions are carried out by a Formula One pit crew. Here they are broken down: 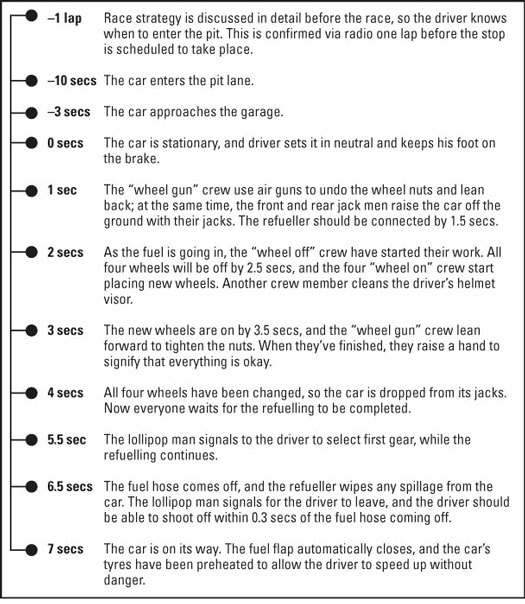 A second-by-second look at the pit stop

Pre-programming: Once the strategists have agreed on when the driver is to make a pit stop and the intended duration of the next stint, the driver's fuel rig is programmed to deliver the precise amount of fuel required.

Timing: The driver's race engineer tells him over the radio, usually on the preceding lap, when to pit. At the same time, the team manager — listening in to all team radio communications — scrambles the driver's pit crew, who gather their equipment and tires and move from the garage into the pit apron in front of the garage. The lollipop man — a crew member with a big carbon-fibre lollipop — stations himself in line with where the nose of the car will stop and holds out his lollipop directly in the driver's path, giving him a clearly visible guide for his precise stopping place.

Although the pit lane limiter helps, the driver is the one responsible for being under the speed limit as he crosses the line entering the pits. The limiter only prevents the car accelerating beyond that speed once it's already below it.

Hitting the marks: The driver stops the car in the appropriate spot. As the car stops, the lollipop man brings down his lollipop in front of the driver. Imprinted on the face of the lollipop is the word "brakes" to remind the driver to keep his foot on the brake pedal so that the wheels don't turn as the wheel nuts are spun loose. The driver must also prevent the engine from stalling, which they can be prone to.

It is essential that the driver stop at precisely the same place that his crew are awaiting him. Failure to do so means that the crew have to drag their equipment and tires up to the car, costing valuable seconds. To help the driver hit the mark, the stopping place for the front and rear tires and the lollipop man are marked out by extremely tough-wearing adhesive tape.

Front jack: Crouching next to the lollipop man is the front jack man. The instant the car stops he levers his jack under the nose of the car and lifts it into the air. The jack is made from steel tubing and has a quick-release button to bring the car back down.

In most cases the car only needs to be jacked-up around two inches though at certain tracks the pit lane is on an incline and the jacking height has to be increased, which is done by giving the jack bigger wheels. Because teams have different nosecones giving different aerodynamic characteristics, they need also to have specific jacks to suit them, with specially tailored mating points.

Rear jack: The rear jack man has to wait until the car has passed him before getting into position. He then places his jack beneath the car and raises the rear of the car.

Starter motor: The rear jack has a fitting incorporated into it for a starter motor. The starter is there ready to bring the engine back into life if the car stalls. A car may stall due to driver error or trouble with the gearbox, clutch, or hydraulics system. The starter is fitted with an extra-long lead as a precaution in the event that the car stalls after jumping forward a few feet.

Wheel changing: Each wheel has two crew members. One operates the compressed air-driven gun that removes the single, central retaining nut. The other removes the old wheel and fits the new. The gun man then re-attaches the nut and tightens it to around 500 lb/ft (pounds per foot). The wheel nut and the socket of the gun are magnetized to prevent the nut falling to the ground. This whole process takes around three seconds.

To prevent the nuts working loose, the right-hand side of the car uses right-handed threads, the left-hand side of the car left-sided threads. This means that the guns of the right and left sides have to work in opposite ways. Teams usually color code them to denote which is which. Each wheel man has a spare gun with him and usually a couple of spare wheel nuts too, just in case.

Refuelling: A transparent plastic shield is fitted between the filler and the rear of the car to prevent any spilt fuel reaching the hot exhausts. (It's transparent so that the lollipop man can see through it and know when the right-rear tire has been attached.) Two refuellers attach the hose to the car's filler. One handles the hose itself, the other presses on the "dead man's handle" which has to be kept down in order for the fuel to flow. As soon as this handle is released — as it would be by the man running away, for example — the fuel stops flowing. The rig delivers the exact amount of fuel that's been programmed in, at the rate of 12 liters per second.

Fuel shrinks in volume when it is chilled, enabling more of it to be contained within each liter. The regulations allow the fuel to be chilled to 10 degrees Celsius below the ambient temperature.

The rig is standardized and provided by the governing body to the teams who are not allowed to modify it in any way. Attached either to the hose or to the refuellers' helmets are indicators showing when the fuel is flowing and when the process is completed. As soon as these indicators tell the refuellers that the car is full-up, they release the latch that holds the nozzle to the filler and then use a second handle to release the nozzle from a connector on the car.

Overseeing the whole operation are two crew members, each with a 60-liter fire extinguisher. Larger capacity fire hoses are at hand in the garage. An additional safety feature on the fuel rig are earthing strips that are wired to the refuelling rigs and reduce the chances of static electricity discharging — highly undesirable with all that fuel around.

Lollipop up: The lollipop man, who's been watching the whole operation intently, lifts the lollipop. He does so only when he's satisfied that all four wheels have been attached, the refuelling completed, the nozzle removed from the car, and that another car isn't about to be in his man's path. Only then can the driver leave.

Pit lane exit: The driver, while waiting for the crew to finish, will have armed his launch control. The launch control, in concert with his pit lane speed limiter, governs his getaway. As he crosses the line denoting the end of the pit lane speed limit he disengages the speed limiter and accelerates hard back up to race speed, taking care not to cross the next white line — the one that denotes the exit lane back onto the track — before he reaches the end of the pit lane itself. Failure to respect this will incur a penalty.