How Many Pixels Are Enough for Your Digital Images?

Like other digital devices, your Nikon D7100 creates pictures out of pixels, which is short for picture elements. You can see some pixels close up in the right example, which shows a greatly magnified view of the eye area in the left image. 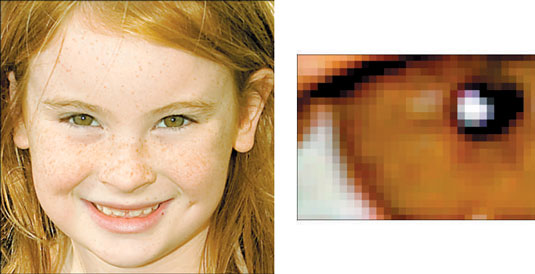 You can specify the pixel count of your images, also known as the resolution, in two ways:

Either way, you can choose from three settings: Large, Medium, and Small. You can view the resulting resolution value for each setting if you adjust the option via the Shooting menu.

The first pair of numbers shown for each setting represents the image pixel dimensions — that is, the number of horizontal pixels and the number of vertical pixels. The second value indicates the approximate total resolution, which you get by multiplying the two pixel dimension values. This number is usually stated in megapixels, abbreviated M on the menu screen (but typically abbreviated as MP in other resources). One megapixel equals 1 million pixels.

Note, however, that if you select Raw (NEF) as your file format, all images are captured at the Large setting. Also, the numbers you see assume that you use the default setting for the Image Area option. At the default setting, the camera captures the image using the entire image sensor (the part of the camera on which the image is formed).

So how many pixels are enough? To make the call, you need to understand the three ways that pixel count affects your pictures:

Here are some recommendations about which Image Size setting to use: