Tell a Concise Story and Shoot Your GoPro Movie for Editing

Explore Book Buy On Amazon
Some of the best GoPro movies show the same activity from multiple perspectives. Whether you're using multiple cameras to capture the scene, or shooting several times with the same camera, consider the importance of showing the scene from different angles.

Whether you're shooting a BMX bike jump, a skateboard trick, or a day at the pool, consider shooting the action the following ways: 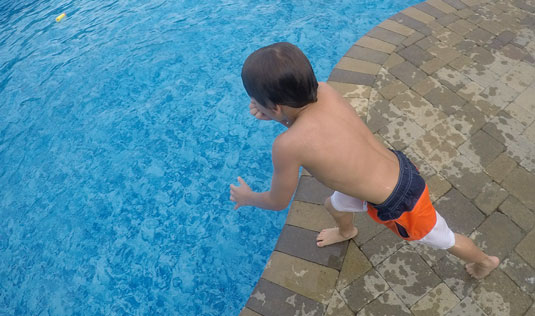 Overhead of kid about to jump in pool.

Remember to shoot your movies with variations of the scenes you plan to use. There's a misnomer that suggests shooting as much footage as possible, sort of like the Alfred Hitchcock version of a gorging bear, so you have a lot to put together later.

Not the best plan. It will take you a long time to make sense of it, and you'll also find that you use the key scenes you intended to shoot anyway.

Instead, try to capture the necessary shots with the appropriate variations with camera angle, focal length, and camera to subject distance. So if you wish to depict the subject entering a key location, you can concentrate on the variety of ways that happens with an eye on how it comes together in editing.

For each scene, consider the following variations: