Your Dog's Intelligence and Emotions

Explore Book Buy On Amazon
Some people still think that dogs don't think or experience emotions. Although it's true that dogs don't have the intellectual capacity of some other mammals like dolphins, they have other strengths and intelligence that we have yet to discover.

Dog cognition has become a global obsession. In the past decade alone, a scientist has figured out ways to monitor dogs’ brain activity, decode their DNA, and do comparative analysis with human and other mammalian brains. Electrodes and MRI scans track the brain centers that alert to strong scents, familiar faces, various expressions, and spoken words.

Interested in reading more about dog cognition? Research the topic online or at your local library. Periodicals like Science Daily and Nature (both online) stay abreast of all the current studies. Have fun exploring the new science of your beloved puppy.

Intelligence might play a factor in your selection of a new puppy as well, especially if you aspire to competing in dog shows or performing with your new best friend.

Until recently, the scientific community had a hard time admitting that dogs have feelings. Why? Because in academic circles nothing is real unless there is measurable data to prove it. Since no one in academia could show that dogs were capable of feeling emotions, reasoning, and attachment, it just wasn’t so.

Enter two scientists: Dr. Stanley Coren began as a psychology professor and neuropsychological researcher at the University of British Columbia, whose lifelong hobby with dogs finally realigned his professional career. In 2008, he did what at the time seemed like a simple comparative analysis showing beyond a reasonable doubt that dogs have similar cognitive abilities to 2-2-1/2-year-old children. Researching at the University of British Columbia, Coren set out to determine which breed of dog was the smartest based on a set of questions that tested their responsiveness to human direction. Although the findings caused quite the ripple in the dog world, the significant undisputable discovery was that all dogs, regardless of their breed or intelligence rating, are capable of processing information, reasoning linear outcomes involving getting something they desired (such as a bone or freedom), and deducing simple arithmetic. He also showed that dogs could learn up to 150 words.

Dr. Coren’s publications opened the floodgates, and soon studies from around the world were conducted on topics including a dog’s musical preferences to similarities in the body chemicals released during petting.

Fast-forward to 2012 when another human neuroscientist, named Gregory Berns, an MD/PhD who specialized in MRI analysis, did a similar experiment with dogs. By tracking their brains' responses to familiar smells, sights, and verbal directions, he discovered beyond a reasonable doubt that dogs show similar proactive and excited reactivity to everyday routines and people as we do.

Further studies with Dr. Berns’ team of scientists showed that dogs and people have similar brain centers, chemical releases in response to anticipation of positive outcomes, and neurological wiring. His revelation set the scientific world on fire. proving to people everywhere that, yes, dogs

The major difference between a dog’s brain and a human’s brain? The size: “A large dog’s brain is about the size of a lemon,” says Dr. Berns. So, what’s going on in all those empty pockets of your puppy’s brain? Much of it is devoted to olfactory receptors and sensory tunnels that collect information about your puppy’s present situation: from the noises they hear to the sights and smells surrounding them. We people swapped out sensory awareness for complex thinking skills, in the process growing the frontal lobes of our brains, or what’s called the cerebral cortex.

What a dog's nose knows

With all the hoopla about dogs, some naysayers still claim that dogs are just not as smart as everyone thinks. Rather than point out what dogs excel in, they point to how a dog’s intelligence can’t compare to a dolphin, chimpanzee, or person. Yes, I’ll admit that I can’t teach a dog to make me breakfast in bed or balance my checkbook, but dogs can do plenty of things people won’t try, either. 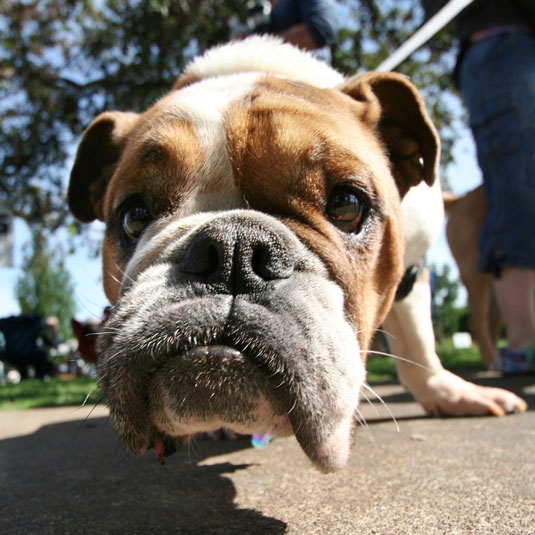 Dogs have stellar hearing and response rates, fully capable of alerting to an unfamiliar noise or intruder if they’re prone to doing so.

Most dogs have acute scent-detection abilities, too — far surpassing human comprehension. In her book A Dog’s Nose, Alexandra Horowitz, PhD, lays out your puppy’s most sensitive appendage for all the world to see. Sure, their brains may be smaller than our own, but they make up space by devoting 40 times the sensory surface area to interpreting a world we cannot fathom — a world full of scented rainbows. Here are some other points Horowitz makes:

Sure, dogs aren’t smart like people are, but it's precisely because they are not people that dogs are brilliant in their own right, and the sooner you can recognize, respect, and reward your puppy for their version of clever, the sooner you’ll be navigating your own love story.

When walking your puppy, allow some time for sniffing — especially in areas where dogs congregate. Sure, the idea that your dog is sniffing other dogs’ eliminations sounds gross to you, but you’re not a dog. To your puppy, reading the morning “pee-mail” is the highlight of their day.

Now that science is up to speed on the emotional life of dogs, it’s time to tip my hat to one of the most renowned neuroscientists of all time, Jaak Panksepp, PhD. He discovered that all mammals (humans, too) are born with five master emotions that rule all their behavior, day in and day out. I’ll relate the five emotions to dogs only, but don’t be afraid to let your imagination run wild — we have more in common with our dogs’ emotional landscape than you might think.

Seeking is the master emotion that drives a dog’s survival: They hunt to find food, water, and companionship. As a social creature, your puppy can’t survive on their own and will form close bonds to whoever they spend time with, which often surpass their connection with other, unfamiliar dogs.

Scientists have recorded 100 expressions that dogs use to communicate with people. Many of these expressions are easy to identify: I want some, play with me, pet me now, time for breakfast, let’s go for a walk! See how many expressions you can read — you know your puppy best.

Play is somewhat of a mystery: No one can put their finger on why it happens — it just does. Dogs play when they feel safe where they are and who they are with: It’s a good measure of your puppy’s mood.

Playing and seeking are baseline emotions that you can use to measure your puppy’s mood accurately. When taking your puppy out and about or introducing a new distraction in your home, if your puppy will take a treat or engage with a toy, rest assured that they're feeling secure enough to access their positive emotions.

Fear is a tricky one: It’s a sign that your dog is feeling unsure and stuck. In the next section on body language, you’ll learn the telltale signs of fear, but you don’t have to imagine too deeply — fear is a universal feeling. It freezes joy and leaves dogs immobilized, not sure of what will happen next and unsure what exactly to do about it.

Socialization is the best insurance that your puppy is comfortable with all the sights and sounds he’ll experience in your world: Otherwise, you’ll never know when fear-of-the-unknown might strike.

Panic is fear on steroids. Puppies panic when imminent death or peril seems at hand: It can happen in the early weeks of life when a puppy is separated from her litter, or later. A husky was crated during a small house fire, while the alarms blared and fire crews arrived to douse the blaze; after that experience, that pup panicked every time he was asked to go into a crate. Panic shuts down all other emotions and leaves a puppy in a state of, well, panic.

Sarah Hodgson is a dog and puppy behavior expert and the author of many bestselling books on dog training. Her positive techniques help dogs become well-behaved family members. She writes for the Huffington Post, and collaborates on articles for Parenthood, Prevention, and Country Living magazines as well as The New York Times. and has appeared on Animal Planet. Connect with her at SarahSaysPets.com!