By: Stanley Coren and Sarah Hodgson and
Updated: 03-26-2016
From The Book: Understanding Your Dog For Dummies

Your dog is communicating a lot through her body postures and also tuning in to your body language more than you might imagine. Regulating how you hold your posture and recognizing your dog's body language can enable a fluent dialog between the two of you. The figures below illustrate common dog postures.

Remember that if your dog is shrunk and low, she's feeling insecure or scared. If her weight is pitched forward, she's confident, on alert, or in defense mode. If her head is hung low, but her body is relaxed, the message is loud and clear: "I'm exhausted!" 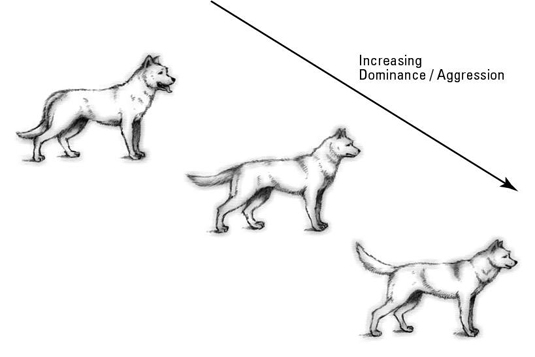 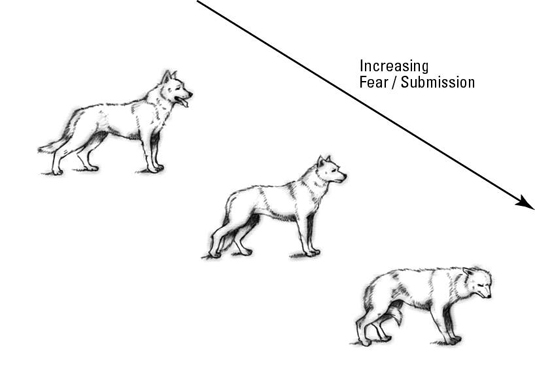 Stanley Coren is best known to the public for his popular books on dogs and on general psychological issues. However, within the scientific world, he’s also a highly respected scientist, a Professor of Psychology at the University of British Columbia, and a Fellow of the Royal Society of Canada.
His engaging writing style and his broad knowledge about the behavior of dogs and people have made his books The Intelligence of Dogs, Why We Love the Dogs We Do, What Do Dogs Know?, How to Speak Dog, The Pawprints of History, How Dogs Think, Why Do Dogs Have Wet Noses?, and Why Does My Dog Do That? all bestsellers.
Roger Caras, President of the ASPCA, and himself a bestselling author of dog books, noted “Stanley Coren has an incredible gift — the ability to take the most complex matters and make it all seem so simple and clear.” Perhaps this is why Coren was named Writer of the Year by the International Positive Dog Training Association and is a sought-after contributor to a number of national dog and pet magazines, including Pets Magazine, Modern Dog, AnimalSense, Dog and Puppy Basics, and AKC Gazette.
Many professional associations have recognized Coren’s work with service dogs, and he’s received awards from several major police dog organizations, including the California Canine Narcotic Dog Association and the British Columbia Police Canine Association. His work with and knowledge of dogs has often caught the attention of the media, and he’s been the subject of feature articles in People Magazine, USA Today, Time Magazine, Maclean’s, US News & World Report, New York Times, Los Angeles Times, San Francisco Chronicle, Washington Post, and others. His affable manner has also made him a popular guest with the broadcast media, and he’s been featured on numerous television programs, including Oprah, Larry King Live, Dateline, 20/20, Maurie Povich, Good Morning America, Charlie Rose, and the Today Show. He currently hosts the national TV series Good Dog! in Canada.

Sarah Hodgson, president of Simply Sarah Incorporated, has been a trainer of dogs and their people in Westchester, New York, and Southern Connecticut for more than 20 years. She’s the author of eight dog-training books, including Puppies For Dummies, Dog Tricks For Dummies, Puppies Raising & Training Diary For Dummies, Teach Yourself Visually Dog Training, You and Your Puppy (co-authored with James DeBitetto), DogPerfect, 2nd Edition, PuppyPerfect, and Miss Sarah’s Guide to Etiquette for Dogs & Their People. In addition, Sarah has produced two videos, patented a dog training leash (the Teaching Lead), and invented many other products to simplify the shared lives of dogs and people.
Sarah is frequently featured as a dog training specialist on network television, radio, and print media, including The New York Times, NBC, CBS, Animal Planet (Disney syndicate), FOX, CNN, WOR, Hollywood Pets, Parenthood magazine, and others. She has worked with many famous persons’ dogs, including TV personality Katie Couric, actors Richard Gere, Glenn Close, Chazz Palminteri, Chevy Chase, and Lucie Arnaz; business moguls George Soros, Tommy Hilfiger, Tommy Mottola, and Michael Fuchs; and sport greats Bobby Valentine and Alan Houston.
In addition, Sarah is a behavior consultant and education facilitator at the Adopt-A-Dog shelter in Armonk, New York, where she holds training and socialization programs, conditioning each of the dogs within a fully decorated home environment before their formal adoption.