Getting the Basics of Jack Russell Terriers

By: Deborah Britt-Hay and
Updated: 03-26-2016
From The Book: Jack Russell Terriers For Dummies 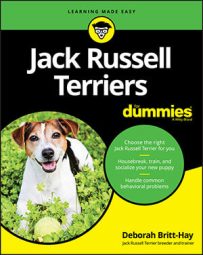 Most Jack Russell Terriers (JRTs) make wonderful pets, but not all make wonderful show dogs. It's much easier to find a dog of pet quality than it is to find a dog of breeding or show quality. Don't allow a breeder to dissuade you from a dog you're drawn to in favor of a more expensive show-quality dog unless you're seriously planning to breed or show your dog. Although the other dog may meet show standards, the most important feature in a pet is personality. Allow your temperament and preference to be your guide.

In the end, it is important to buy from a reputable breeder and to buy the healthiest dog you can find that best fits the criteria you have selected as important. Unless you're planning to show your terrier in conformation classes, forgive weaknesses that are unimportant to you, provided they don't jeopardize the health and future of your pet. Personality, temperament, and appeal are the most important qualities you should consider, and then have your dog spayed or neutered as soon as your vet says it's feasible. Don't fall into the lure of breeding a pet-quality dog just to raise a few bucks. It won't pay off in the long run, and you will be adding to the problems the breed already faces — overpopulation and indiscriminate breeding.

Because the Jack Russell Terrier was bred to be a hunting dog, he must appear ready for action and excitement and should present a picture of a friendly, outgoing dog with a bright look and a cheerful expression. If you've seen even one Jack Russell Terrier, you've probably noticed that quick, eager-to-pounce look in his eyes, especially if you pick up a ball or another toy.

Although a JRT always should be game for a good hunt, he shouldn't have a hair-trigger bark, shouldn't yap at anything that passes by, and shouldn't appear anxious or nervous. A dog that feels the need to bark at the slightest perceived threat usually is timid by nature, a definite fault in the Jack Russell breed. Any inclination toward cowering, timidity, or nervousness is also undesirable. Even as a pet, you can see why these traits are frowned upon. Because the JRT's bark is quite loud and distinct, you really don't want to be awakened ten times during night because your JRT thinks he may possibly hear something as far as ten blocks away.

Don't confuse nervousness with high energy. A Jack Russell Terrier is always on the move, hunting and exploring his surroundings. An anxious dog — one who routinely paces or is easily upset by changes in his surroundings — isn't considered to be of ideal JRT temperament.

Although the Jack Russell should be confident in his actions, overt aggression — especially toward humans — isn't a desired trait. The JRT is bred to be confident in his job as a hunter and to either flush quarry out of its den or hold the quarry in the hole until his master comes and calls him off. Except for his job as a rat hunter, the dog isn't asked to attack the quarry, and any such tendencies are seriously frowned upon. As a hunting dog, the JRT should work alongside his master, holding when asked and relinquishing his prey when commanded. He should happily comply with his owner's wishes and should be neither encouraged to display aggression nor punished for being bold.

Along with their alert, energetic appearance, JRTs should also exude intelligence, which they often do to a maddening degree. The dog is quick to solve problems and is eager to find ways around perceived barriers. All this quick thinking makes the dog delightful to be around and humorous to watch. But be careful. Many Jack Russells have been known to outsmart their owners!

Charming and playful, the JRT is happiest in the company of his owner, either snuggled up on a bed or curled up at your feet, but always on the lookout for a good game of ball. Remember, however, that the Jack Russell Terrier is far from a couch potato. He needs regular play periods throughout the day to be truly content.

When at a loss for a playmate, the JRT is likely to create his own entertainment, either by tearing through the house at breakneck speed like a drag racer, by teaching himself to sit like a gopher to get your attention, or by barking at you and then running off to try to entice you to play. The bottom line is, you have to have a sense of humor to appreciate a Jack Russell Terrier.

Deborah Britt-Hay has been breeding and training Jack Russell Terriers for years. She finds that her dogs make great companions for her family and her horses.