A Brief History of the Poodle 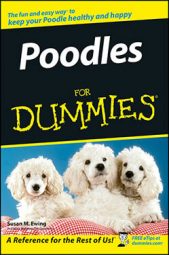 Many people look at Poodles and think "froufrou," when in reality the Poodle was bred as a working farm dog. To understand more of the Poodle's background, here's a history of the beginnings of the breed.

All dogs are descended from the wolf, which may explain why they howl at sirens and the like. The original dog was domesticated between 13,000 and 17,000 years ago. From those early beginnings, man has created over 300 breeds, from tiny Chihuahuas and Yorkshire Terriers to giant Great Danes, Irish Wolfhounds, and shaggy Newfoundlands. Each breed was developed with a specific purpose in mind, from sitting in a person's lap and being a companion, to guarding livestock and property, to retrieving fallen game.

As time went by, people began expecting dogs to be able to do more than their primary tasks, because it's easier and cheaper to have one dog do many jobs than to have a separate dog for each task. The Poodle, for example, was bred to hunt and retrieve game and to have an instinct to herd livestock.

Just when and where the Poodle emerged as a separate breed is hard to say. Romans carved Poodle-like dogs on tombs as early as 30 AD, and they were pictured on Greek and Roman coins, but experts don't know if those dogs died out or if they further evolved into the modern Poodle.

Poodles are sometimes called "French Poodles," but the breed is generally considered German even though its actual country of origin is unclear. Dogs from Russia and France contributed to the modern Poodle, and one theory states that the Poodle's ancestors came from Portugal or Spain.

Susan M. Ewing has been “in dogs” since 1977 and enjoys showing and trying various performance events, with an emphasis on “trying.”
She holds a master’s degree in Television/Radio from Syracuse University in New York and has attended canine seminars at Cornell University. She’s a member of the Dog Writers Association of America, as well as the Cat Writers’ Association, and is listed in the 2005 edition of Who’s Who in America.
Ewing has been writing professionally since she was 16 and is the author of several books: The Pembroke Welsh Corgi: Family Friend and Farmhand (Howell); A New Owner’s Guide to Pembroke Welsh Corgis, The Pug, The Dachshund, and German Shepherd Dogs (all TFH Publications); and Bulldogs For Dummies (Wiley). Her column, “The Pet Pen,” appears in The Post-Journal (Jamestown, New York) every Saturday. One of her essays is a part of the book Cats Do It Better Than People.
Other articles of Ewing’s have appeared in AKC Gazette, Family Dog, Bloodlines, German Shepherd Dog Review, Good Dog!, Pet Odyssey, Dog Fancy, Dog World, Puppies USA, the national Schipperke Club newsletter, ASPCA’s Animal Watch, Bird Talk, Kittens USA, Cats USA, and Cats Magazine.