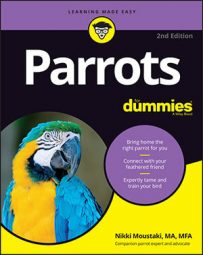 Explore Book Buy On Amazon
Parrots are long-lived animals. Even a bird with a shorter lifespan, such as a budgie or a lovebird, can be a child’s companion from kindergarten to college. With that in mind, don’t choose a bird while standing in the pet store admiring that big macaw or a bouncy caique. Instead, consider the following when picking a parrot. 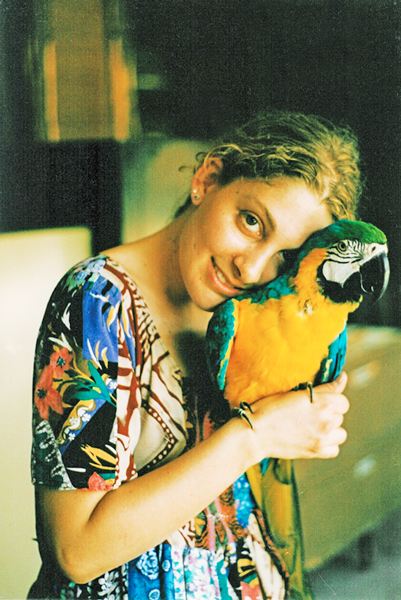 When humans truly understand and respect parrots, a positive relationship often results, and screaming can be reduced.

You can learn the general qualities of different species, but there will always be individual parrots that don’t conform to these characteristics. You can choose a parrot based on species, but you really have to spend a little time with an individual bird to know his habits, temperament, and companionability.

For example, Amazons are known to be feisty and aggressive, but some Amazons wouldn’t bite anyone. African greys are known for their talking ability, though some don’t talk much at all, preferring to whistle and mimic household sounds.

The chemistry between the two of you

Not every person is going to get along with every parrot. You’ll find that you have a rapport with some parrots but not with others, even within the same species. The only way to find out if you have chemistry is to spend some time with several birds, the way you would with puppies—or other people, for that matter. Also consider that some species tend to be one-person birds rather than family birds, wanting to bond with just one person in the household, and that person may not end up being you, even if you’re the person who brought the bird home.

Not all species are created equal

The reason why you can’t just walk into the pet shop and choose the prettiest parrot is that each species has different needs and behaves in a unique manner. You have to know what you’re getting into before you think about taking a bird home. For example:

A big reason why some parrots are re-homed is noise. Parrots are demanding and can become quite vocal about their desires. They’re also programmed to make a racket at sunup and sundown, and there’s nothing you can do about that. What you can do is choose a parrot whose volume and voice isn’t as offensive as some others.

Noise is directly proportional to the size of the parrot. The smaller the bird, the smaller the noise. This doesn’t account for the amount of noise the bird creates, just the volume. The volume, or loudness, tends to go up with the number of birds as well. The amount of noise indicates the time span in which noise is made; for example, some parrots only vocalize for a couple of hours a day, but others do it nearly all day long. One cockatiel’s vocalizations may be tolerable, while a flock of them can be deafening because they’re all competing with one another to be heard. But a racket is in the ear of the hearer, isn’t it? One person’s unbearable din is another person’s sweet melody.

African species tend to be a little quieter than other birds, while South American and some Australian species tend to be louder and more raucous. For example, most poicephalus species, such as Meyer’s parrots and Senegals, aren’t as persistently noisy or loud. Cockatoos, on the other hand, are ear-piercing and persistent, noise being one of the main reasons they are re-homed or given up to rescue organizations. Of course, this generalization changes with the number of birds housed together and the state in which they’re kept. Unhappy birds will often screech to get attention.

All birds need space to move around, and ideally, the space should be large enough to allow for flight. The long-tailed species, such as the keets, cockatiels, and macaws, need very large, tall housing, or their tails become ratty and they become unkempt in general.

Don’t skimp on housing size for larger parrots. A cramped bird is very unhappy, and unhappy birds can develop some unfortunate habits, such as screaming, biting, and feather plucking, to mention just a few. Some parrot species are diminutive, like the parrotlet and the lovebird, but even these need large housing to receive the critical exercise they require.

Lifestyles of the neat and messy

All parrots are messy. They scatter seed and wet foods, poop wherever they want, and spray water all over the place when they bathe. I was once horrified to discover that millet seeds had literally begun to sprout in my carpet!

Parrots shred paper and can destroy items in the house if allowed to roam. There are no species that are less messy than others. However, the smaller the bird, the easier it may be to contain the mess. Here are birds known to be particularly messy.

To combat mess, some parrot owners fight fire with fire — or, bird with bird. Some people buy small quail to keep inside or near a large aviary. Budgies and cockatiels usually get along with these little ground birds, but most other parrots won’t. Just keep an eye on the quail to make sure they aren’t being bullied and remove them if they are.

From easily affordable to requiring a loan

The most inexpensive parrot is the American parakeet (budgie), from $7 to $14. The most expensive parrot commonly offered for sale is the hyacinth macaw—about $10,000—and some of the rarer parrots cost even more. Somewhere in between are the rest, from the green Quaker parrot at between $100 and $200, to the Moluccan cockatoo at between $1,500 and $2,000. One thing is for sure: Parrots aren’t cheep. Of course, prices change all the time depending on availability, as with anything else.

What are you prepared to spend for a parrot? Remember that no matter what you spend, the cost of veterinary and general care is the same. You’re going to spend as much money caring for a $14 budgie as you will for a $450 turquoise pied parrotlet.

Some parrots are well known for their talking ability, but others may never talk at all. Most will whistle or make other sounds common to your household. These are the most famous chatterboxes.

There’s one irrefutable rule in the bird world: If it has a beak, it can bite. Some individual parrots may never bite anyone; some will bite every time someone is unlucky enough to come near its beak. Though some species are less likely to bite than others, parents should realize that any parrot can give a child a good nip, which can be painful and scary to younger kids. Children may not understand that a bite isn’t personal.

Here are species that may make good hands-on companions for children.

Though it seems logical that smaller birds would be more suitable for children, some small birds are actually pretty feisty and can be too nippy or temperamental for younger kids to handle. These include

Of course, you can always have a pair of parrots for a child to care for, but not handle. Parrots tend to get along best in male-female couples, but not exclusively. Budgies (also known as parakeets) and lovebirds are especially suitable if they’re a compatible pair. They’re colorful, chatty, enjoy each other’s company, and can live upwards of 15 years if cared for properly.

One, two, or more

Some parrots enjoy each other’s company, whereas others will fight to the death with their own or a different species. There’s no guarantee that buying two birds of the same species will result in fast friends. You may notice two parrots canoodling with each other in the same cage. This may be a true pair, a male and female who like each other. Same-sex birds can also bond and be good friends, and you won’t have to worry about babies resulting from the pairing. Just be careful about how you introduce same-sex pairs.

These are the parrots most likely to be able to be peaceably housed together, given enough space, such as a very large aviary.

But the parrots of different species most likely to become aggressive and even kill each other if housed together are the following.

If you want to house birds of different species together, buy two young parrots and raise them together. You can’t always be certain that they’ll remain friends forever, but you'll have given them a good start.

Nikki Moustaki is an accomplished avian care and behavior expert. She works with clients to heal strained relationships between themselves and their feathered friends. She has published 47 books, including more than 30 covering the care and training of exotic birds.