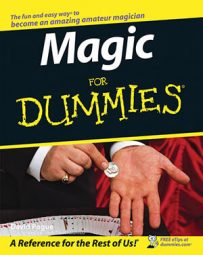 Explore Book Buy On Amazon
Learning and practicing magic is fun and challenging and to keep it as stress-free as possible be prepared to coolly answer questions about your tricks and make a quick recovery when a trick goes wrong. Know the different types of people in your audience so you can deal with their sometimes offbeat behavior and study some key words you will use repeatedly as you continue on your magic career.

A magician's answers for 'how’d you do that?'

So you don’t look like an amateur, never reveal how you perform a magic trick. When someone asks you how you did your trick you need to say something, so try one of these snappy answers:

How to recover from a flubbed magic trick

Ideally, you would never make a mistake when performing a magic trick. Unfortunately, life isn’t like that and circumstance and bad luck can rear their ugly heads. When a trick goes wrong, graceful performers shrug it off with humor and recover if they can. Try these lines when you mess up a magic trick:

A guide to the magic show audience

Most audience members enjoy the entertainment and mystery of a magic show. But magic is an assault on every law of nature we’ve learned — making some people’s brains squirm. As you’re working through your magical career, here are some of the rarer magic spectators to watch out for:

The field of magic — videos, lectures, and books — is filled with jargon you should know in order to learn and practice magic tricks. Here’s a guide to some of the magic terms you’ll hear most often: