How to Fix a Broken Hard-Wired Doorbell

By: Gary Hedstrom and Peg Hedstrom and Judy Ondrla Tremore and
Updated: 03-26-2016
From The Book: How to Fix Everything For Dummies 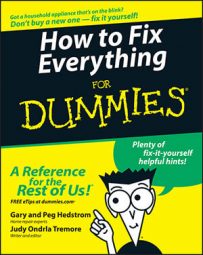 In older homes, doorbells are hardwired into the door frame or very near it. They usually don’t present problems for years. But, inevitably, they no longer work and you have to take them apart to repair them.

Wired doorbells have a bell, a junction box with a transformer on it, and the button at the door. Ringing the bell connects the ground wire together, which activates the circuit. But several things can go wrong: loose wires, button defects, short circuits or a power failure, corroded connections, an accumulation of dirt on parts, and malfunctioning bells or transformers. You need pliers, screwdrivers, wire strippers, electrical contact cleaner, fine sandpaper, isopropyl (rubbing) alcohol, and a cotton swab or old toothbrush.

Although doorbells don’t emit much voltage, the transformer is connected to a 120-volt wire in the house. Turn off the power before you start working on the doorbell.

When the bell doesn’t ring, look at the circuit breaker or fuse box. If it hasn’t tripped, turn off power to the doorbell. Now follow these steps:

Never oil any part of the bell or chime. It will only make the sound worse and may even cause the device to collect more dirt.

The grommets holding the chimes can deteriorate when they get old, causing a muffled sound. Get some new ones and replace the old ones. Also look at the hammer to see whether it’s bent. If so, straighten it out by using pliers. Be careful not to damage it.

Gary and Peg Hedstrom are self-taught repair masters with experience in carpentry, plumbing, appliance repair, and more. Judy Ondrla Tremore is a writer and editor for various newspapers and magazines.