Photo Decluttering Once and For All

By: Jane Stoller and
Updated: 01-24-2020
From The Book: Decluttering For Dummies 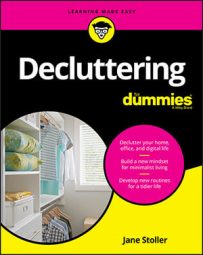 Explore Book Buy On Amazon
You are not alone in feeling overwhelmed about photo decluttering. The state of your photo organization, or lack thereof, is nothing to be ashamed of, but not doing anything about it after reading this article is!

You may think going through your photos is going be fun, and at times you will smile at the wonderful memories and rejoice in the special moments of your past. It’s also possible that you may never want to take a picture again after you have done a mass digital photo decluttering. All of the emotions you may feel before, during, and after your photo decluttering are normal and okay.

The truth is, photo decluttering may be tough, but it’s worth it. Once your photos are decluttered, you’ll have less clutter in the back of your mind regarding your digital photos. And think about it: If you stress one minute per day about the messy state of your photos, you basically will have wasted over 6 hours in a year just over stress! Plus, think about all the time you waste looking for photos! You may miss your best photos or forget you even had them and will never be able to see how great you looked that summer day in 2009. So, take those 6 hours, sort your photos, and never waste time thinking about decluttered photos again.

Decluttering and modernizing printed media, including slides, photos, and videos, not only frees up physical space but also allows you to organize them in a more accessible way.

Modernizing does take time, collaboration, and resources, so therefore, it’s really important that the digital media you are keeping is worth it in the first place.

If you don’t know what a slide is, then skip this section or ask your parents, as they may have some boxes in the attic to declutter.

I found four huge bankers’ boxes of slides in my parents’ attic, and I found a local camera store (yes, they still exist) and asked them if they convert slides to digital. They did and said it was one of their biggest services, which means lots of people are already modernizing.

I brought my slides into the store and two weeks later had a memory stick full of photos, which have brought my parents so much joy to view. They have been looking at these photos constantly over the last two years on their iPad and computers and even committed to decluttering them and making albums so they could find them faster. They made a big print for their bedroom and are happier than ever to have these. If I had not modernized these photos, they would likely not have been able to view them because they don’t have a slide projector and they’d completely forgotten about them.

If you still have slides, I suggest taking them to a professional. Decluttering them can be difficult if you don’t have a slide projector, and you may have to get them all converted and then declutter them after, as my family did.

This section covers my tried and tested photo decluttering strategies for printed photos.

I recommend you take your time and sort your photos with care. For this reason, photo sorting can be a huge time investment.

To start, gather all your physical photos in one location, getting them out of storage forever. You will like viewing these photos, and that is what makes this process so emotional and difficult. My advice is much the same for digital photos, but following are a few quick tips to get you started:

When decluttering your stored videos, get them into a digital format. You can do this yourself by buying equipment or even taking them to your local Walmart or similar department store.

How to manage digital photos

One of the questions that I get asked the most is how I store my photos and what organizing strategies I use. Like anyone with a personal brand and business these days, I have a lot of photos that I need access to on all my devices.

Creating a digital photo strategy takes time and lots of patience for decluttering. Like I said earlier, it won’t happen overnight, but it’s worth it because photos are one of the best reminders of past memories (that is, if you can find them or remember that you even have them in the first place).

My biggest piece of advice is to streamline your photo storage to all devices. That can only be done with some sort of cloud storage system. In all honesty, I did not digitize my photos until September 2016. I remember this date so clearly because organizing my digital photos was always on the back of my mind, and I was embarrassed to call myself a professional organizer when I didn’t even have my own photos organized.

It was easy for me before the digital age to make pretty albums for each year or occasion, and I still have my perfectly organized albums that I cherish and often look at. When we all had printed photos and film cameras, it was much easier to stay digitally organized. The whole process involved having to physically walk into a camera store, buy Kodak film that usually had about 30–50 photos on it, then take those photos, remove the film, bring it back to the camera store, and return later to pick up your finished products. This was not the era of 100 selfies before heading to meet friends. Long story short, it was easier to be photo decluttered.

Even though we are in the digital era, be conscious of how many photos you take because it takes time to declutter them later. When I am snap-happy with my iPhone and take 100 photos of the same latte, I regret it when I’m decluttering later.

When I started the photo decluttering process in September 2016, I was decluttering 16 years of photos. I won’t lie to you; it took me nine months. Of course, I decluttered these in stages, but it was a serious commitment. Now I am overjoyed with my photo organizing. The first figure that follows is how I organized my photos before I converted to a cloud system, and the second figure shows my albums organized in the cloud. I also waste no time searching for photos and can easily bring up a trip or memory when I need to. It is a wonderful feeling. 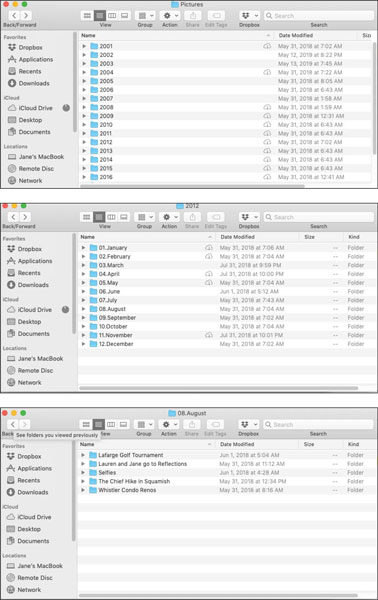 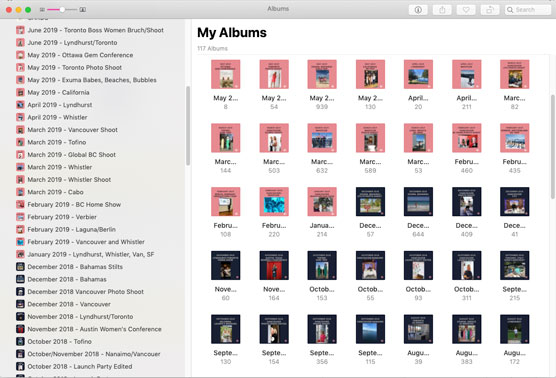 The moral of my story and my biggest advice is to make a strategy today to deal with all your current photos and be able to follow through with this strategy forever. You’ll need to adapt. I was diligent from 2000 to 2016 storing the photos on my computer and backing them up on a hard drive, making an album every month. When I was ready to embrace iCloud (which was later than most people), I adapted this strategy to save my photos on all devices and still declutter my photos monthly.

To create a photo decluttering strategy, it’s important that you never miss a month. Repeat after me: “I will declutter my photos every month.” Staying consistent is the key to staying decluttered.

In 2016 when I decided to declutter my photos, I decided I would declutter two years’ worth of photos every month. For example, I started with the years 2000/2001 and went through all the photos. This figure is an example of my photo decluttering schedule I used to keep me on track. 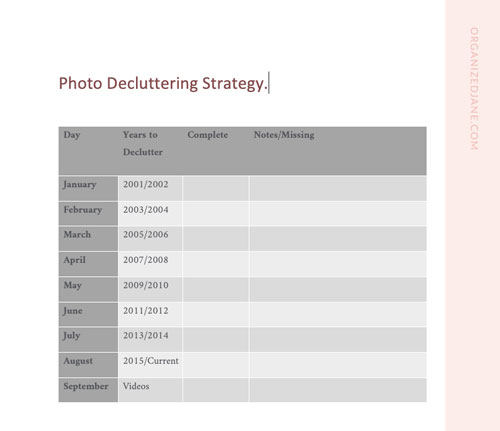 I made an album first for the year and then for each month and then drilled down even further to events.

I was faster for the earlier years because I didn’t take as many photos in the early 2000s. The photo decluttering really became tedious when I got to years 2010 and beyond, as there was a shift to taking selfies, many more multiples, and in general more photos for social media. Instagram started in 2010, which helps explain why most people take so many more photos nowadays.

How to deal with digital videos

I used to keep videos because I thought I’d regret deleting them. But the reality is, I rarely looked at old videos on my laptop or iPhone. Rather, most of the time these videos took up precious space on my devices. I get how much emotion videos can evoke (often more than still images), and you don’t have to delete everything to declutter your videos. However, I do recommend getting realistic with how often you actually look at your videos, creating a system similar to photo decluttering, and ensuring that you stay consistent throughout the process. The main tip to implement is to carve out time on a monthly basis to go through any and all videos you have on your devices and determine what needs to go.

Unless you’re a professional video editor, properly editing videos is likely a time-consuming process — or you may not even know how to edit videos. Everything from trimming, to applying filters, to cutting out sections can take ages. Hire someone to help you with the videos you want to keep. If you keep only your best videos, then making them even better quality will aid in the decluttering process.

Another idea is to be amalgamate videos from a special occasion and give them to a video editor to take the best parts and make one special video.

If you’re wondering where to find freelance video help, I suggest you start with the following two sites, which I have used to find freelancers for so many digital tasks, including video editing:

Jane Stoller is a compulsive organizer who turned her passion into a profitable business, Organized Jane. She travels the world helping individual clients revamp a single space or guiding corporations in overhauling entire businesses. A speaker as well as an author, she also lectures on management skills at Canada's Vancouver Island University.