Have you seen chiggers, fleas, and bedbugs on your chickens? Take a look at a lineup of a few other suspects. These are part-time pests, jumping on chickens for a meal and then bailing off. They may be a problem where you live. These bugs aren’t fussy — they’ll pester you as well as your chickens. 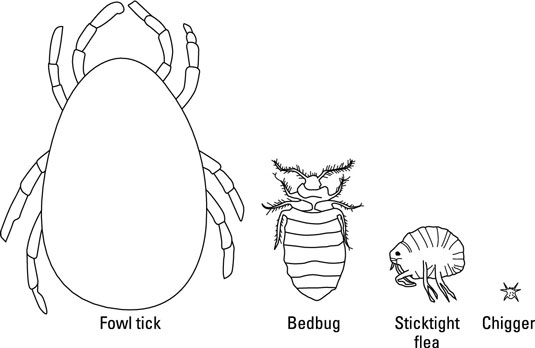 Yes, this is the same bedbug that lives in people’s homes and attacks them. They can move into a coop just as happily, hiding in crevices and taking blood meals from chickens. Unless you’re okay with torching the coop and starting fresh, the best bet is to talk to an exterminator to get rid of them.

Chiggers mainly affect free-range chickens living in the southern United States. These mites live on the ground, preferring fence rows and brushy areas. Chiggers hunt in packs, clustering on chickens’ wings, neck, and breast, and creating blisters where they attach and feed on the skin. Chigger attacks can be serious for small chicks. If you live where chiggers are a problem, pyrethrin sprays or sulfur dustbaths may repel these pests.

Fowl ticks, or blue bugs, also like warmer climates. They feed on a variety of birds and occasionally mammals. The fowl tick’s lifestyle is similar to that of the roost mite or bedbug; it lives in cracks and crevices of the coop and comes out to suck blood from chickens at night.

Chickens heavily infested with fowl ticks can become weak and die. Thorough cleaning and spraying the coop with permethrin are appropriate control measures.

Sticktight fleas cluster in large numbers around a chicken’s eyes and on the wattles. The fleas embed their mouthparts deep in the sensitive skin, taking a meal of blood and creating a lot of irritation. Blood loss can be serious for young chickens. To fight back, we suggest using permethrin dust or smothering the fleas with petroleum jelly.