More Than You Need to Know About Chicken Feathers

By: Kimberly Willis and Robert T. Ludlow and
Updated: 06-18-2021
From The Book: Raising Chickens For Dummies, 2nd Edition

Explore Book Buy On Amazon
Feathers cover most of the chicken’s body. Most breeds of chickens have bare legs, but some have feathers growing down their legs and even on their toes. Other variations of feathering include muffs, puffs of feathers around the ear lobes; beards, long, hanging feathers beneath the beak; and crests or topknots, poofs of feathers on the head that may fall down and cover the eyes.

A feather mutation can cause the shaft of the feather to curl or twist, making the feathers on the bird stick out all over in a random fashion. Talk about a bad hair day! These birds are called Frizzles. The Frizzle mutation can occur in a number of chicken breeds.

Birds shed their feathers, beginning with the head feathers, once a year, usually in the fall. This shedding period is called the molt, and it takes about seven weeks to complete. The molt period is stressful to chickens. 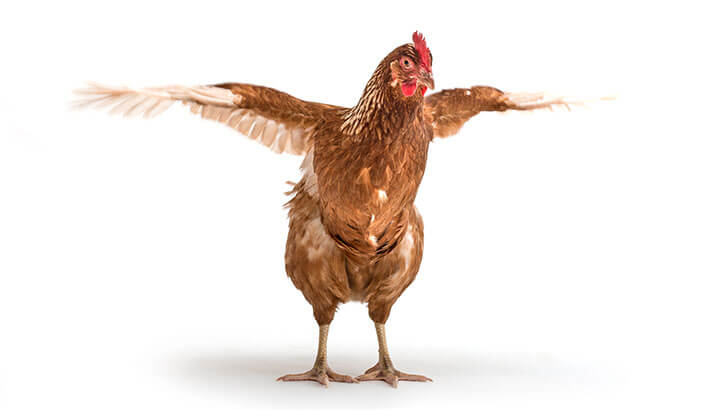 Your average chicken is covered with different kinds of feathers. Photo: © Pets in Frames / Shutterstock

Contour feathers are the outer feathers that form the bird’s distinctive shape. They include wing and tail feathers and most of the body feathers.

Feathers also vary according to what part of the chicken they cover. The following list associates these various types of feathers with the chicken’s anatomy:

Anatomy of a feather

Feathers are made of keratin, the same stuff that comprises your fingernails and hair. Each feather has a hard, central, stem-like area called a shaft. The bottom of the mature shaft is hollow where it attaches to the skin and is called a quill. Immature feathers have a vein in the shaft, which will bleed profusely if the feather is cut or torn.

Immature feathers are also called pinfeathers because when they start growing, they are tightly rolled and look like pins sticking out of the chicken’s skin. They are covered with a thin, white, papery coating that gradually wears off or is groomed off by the chicken running the pinfeather through its beak. When the cover comes off, the feather expands. When the feather expands to its full length, the vein in the shaft dries up.

Chickens can lose a feather at any time and grow a new one, but new feathers are more plentiful during the molting period. The age of a chicken has nothing to do with whether a feather is mature.

On both sides of the shaft are rows of barbs, and on each barb are rows of barbules. The barbules have tiny hooks along the edge that lock them to their neighbors to make a smooth feather. When chickens preen themselves, they are smoothing and locking the feather barbs together.

Feathers grow out of follicles in the chicken’s skin. Around each feather follicle in the skin are groups of tiny muscles that allow the feather to be raised and lowered, allowing the bird to fluff itself up.

How feathers get their colors

Kimberley Willis has raised numerous breeds of chickens and other poultry for eggs, meat, and showing for more than 40 years. Rob Ludlow is the owner of BackYardChickens.com, a top source on raising chickens, and the coauthor of Raising Chickens For Dummies. Rob and his family raise a small flock in their backyard.