How to Design a Solar Room or Greenhouse

Solar greenhouses and sunrooms share some common design features. To design a solar room or greenhouse, you need to understand the greenhouse effect, which occurs when sunlight enters the enclosed space through the glazing (window) and then gets absorbed and stored as heat energy. The heat is then constrained to stay in the enclosed space via the same glazing's insulation properties, plus insulation in the walls. You can enhance the greenhouse effect by increasing the amount of radiation the windows allow to enter while maximizing the glass's insulation against heat. 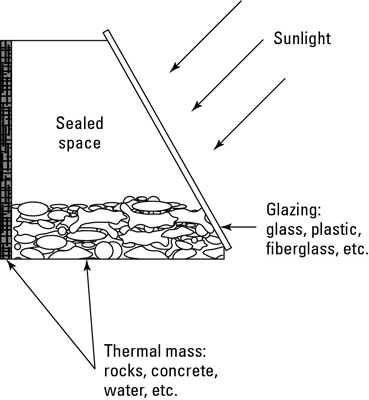 When air heats, it becomes lighter, so the hot air rises, making the air in a room warmer near the ceiling than the floor. The phenomenon is called the chimney effect.

Most solar rooms include vents that open or close to take advantage of the chimney effect. When the solar room is warmer than the house, the vents open, allowing heat from the sunroom to enter the house (vice versa at night or on cold winter days). Or when the room's just too hot, you can completely close off the space from the rest of the house. 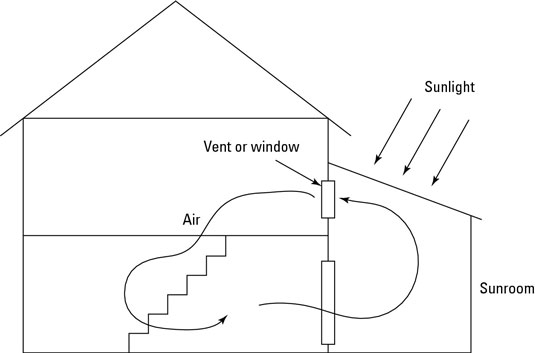 Air warms in the sunroom, rises, and enters the house through the vent; inside, air cools, sinks, and then returns to the sunroom for reheating.

Vent fans can enhance the chimney effect. Solar-powered ceiling fans work well because they don't need to be hard-wired, plus they work hardest when the sun is hottest, which is usually what you want.

There are a million ways to build a solar room, but some practical generalizations can ensure a successful project. The transparent cover (also referred to as glazing, or windows) allows for sunlight entry. The rock pile is thermal mass, which stores heat and serves to regulate a consistent temperature in the space. A reflective wall lining is optional; it serves to reflect sunlight down onto the thermal mass and plants.

As with all solar projects, kits are the best bet for the do-it-yourselfer, and a big industry is dedicated to manufacturing and selling prefabricated kits. 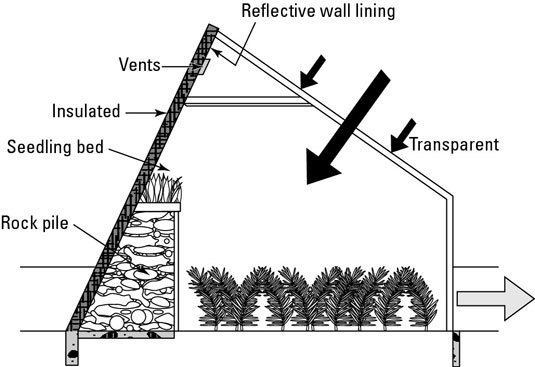 Solar rooms have the same basic components as greenhouses.

As with all solar systems, a collector, or transparent cover, allows sunlight to enter. The larger the area, the more energy captured. You can control seasonal and daily variation by orienting the collector's east/west direction (azimuth) and altitude (upward angle toward the sky).

Commercial greenhouses are usually made with glass ceilings, but you can get the same open effect by angling the window glass.

Double-pane glass works well as a collector, and a number of window coatings and other optical engineering methods can also work to good effect because they allow light to pass through but also insulate for heat.

Greenhouses often have solar reflectors mounted into their roofs in the summer because there's too much sunlight. You can choose from a range of clever movable insulation methods, such as a blind mechanism loaded with radiant barrier reflective material. Hoods, overhangs, and awnings can also control the seasonal and daily variation of sunlight. Window blinds are often used in solar rooms to prevent heat escape at night, to keep the room from getting too hot in the summer, or to enhance privacy. They also make the room much more attractive.

After the sunlight enters the space, an absorber captures the energy and transforms it into heat. Dark, rough surfaces, such as gravel floors in a greenhouse or dark furniture and carpet in a sunroom, work best.

Rocks are cheap for building thermal mass, and water is a good choice because it's cheap, holds heat, and is readily available. For maximum functional effect, drums filled with water may be painted black and set in the direct sunlight. Sunrooms don't require as much thermal mass because you can close them off from the house when needed. Concrete floors are good solutions because they provide not only mass but also a good, solid underpinning to the room.