How to Cook with a Solar Oven

To green up your life, you can build and cook with a solar oven. A solar oven can bake at temperatures above 350°F. You can't rely on precision temperature control, so you have to stick with foods that aren't fussy. But plenty of foods fit the bill.

You can set a solar oven anywhere you want as long as it will get plenty of sunlight. After working with your oven for a few weeks, you should be able to cook just as well as you do indoors. You just need to pick up a few tricks first.

Solar ovens are not toy ovens, not by a long stretch. A solar oven can burn you every bit as badly as a conventional oven.

The first time, just set the oven into direct sunlight and watch the temperature climb. Play around and see how the temperature varies with different conditions (orientation to the sun, time in the sun, and so on).

You can use your solar oven in the winter, but it won't get as hot because the outside air is cooler, plus you get less sunlight in the winter.

To do the actual cooking, you need a good drip pan to facilitate cooking and cleaning. Use a shallow cookie sheet or pan that fits inside your oven (because of the added insulation, its length and width need to be at least 2 inches smaller than the bottom of your cardboard box). You also need a black, aluminum baking pot with a snug lid; everything that's cooked will go into this pot, so this will limit your food options. You can make an oven as big as you want, however, so that you're not really limited. Some people have cooked Thanksgiving turkeys in a solar oven, to very good effect. The pot will get hotter than the temperature of the oven cavity itself (unlike a conventional oven), so be extra careful. You'll be pulling the heated pot up and out of the oven, so get handles that facilitate this upward motion. Certain pots work better than others, so try some different candidates and see what happens.

Solar ovens can get real hot, over 400°F. Not only can you get burned, but if you put napkins or other flammables onto them, you can start a fire. (The cardboard box is well insulated from the heat, so it won't catch on fire.) Treat a solar oven with the same level of respect that you treat your conventional oven. 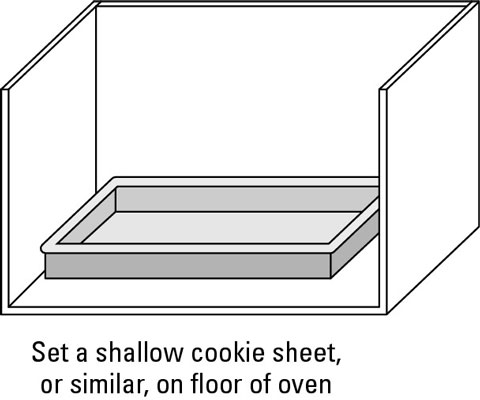 Place a shallow cookie sheet on the floor of your solar oven functions as a drip pan.

You can use a simple oven as a warmer for rolls and potatoes and food that's already been cooked. This method is especially convenient next to a barbecue pit. As you finish burgers or brats, put them into the solar oven.

You may be able to cook corn on the cob. Put each ear into a roaster bag with some butter, seal it, and wait. The precise amount of time isn't important, and neither is the temperature. You can cook half a dozen ears next to your barbecue, and they taste better than the boiled variety.

Likewise, you can heat pots of beans, chili, and other canned goods such as vegetables and soups, depending on the sun. Solar ovens aren't ideal for foods with specific times and temperatures. For example, a cake may not be a good idea.

Your solar oven already has a built-in timer. In the morning, just put something in and then aim the oven at whatever point in the sky you want it to cook. For example, aim where the sun is at 5 p.m., and when you get home from work, your dinner's ready!