By: Rik DeGunther and
Updated: 03-26-2016
From The Book: Alternative Energy For Dummies 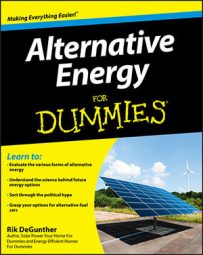 Coming up with alternative energy sources is essential due to the energy demands of a growing population and dwindling supplies of fossil fuels. This list is an overview of available alternative sources of energy: