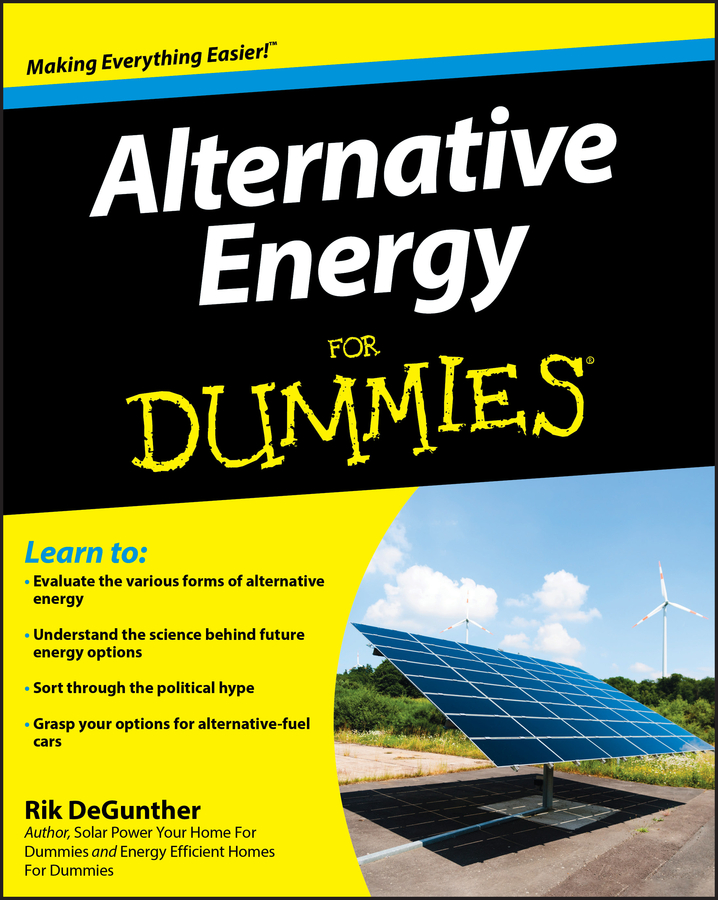 As the price of energy continues to soar, so too has the demand for alternative energy. But there's no clear "winner" in the race to replace fossil fuels. Alternative Energy For Dummies explores the current fossil fuel conundrum and society's growing need for more and more energy. Cutting through the competing claims, this book offers a multifaceted examination of alternative energy, including solar, wind, nuclear, biomass, geothermal, biofuel, and other sources. Each alternative scenario is compared to current fossil-fuel intensive practices in the scientific, environmental, social, political, and economic realms. Readers also gain insight into the future of energy production.

Articles From Alternative Energy For Dummies

If you want to get involved in the alternative energy conversation (and understand what you read and hear), learning these basic terms about energy is a good place to start: Alternative energy: Energy sources that don’t include fossil fuels or carbon-combustible products such as gasoline, coal, natural gas, and so on BTU (British Thermal Unit): The basic unit of energy in the English system Energy: The total amount of effort, or work, it takes to accomplish a certain task Energy efficiency: The ratio of the useful work obtained from a process to the raw power taken to achieve that process First law of thermodynamics: A key physics principle stating that energy can neither be created nor destroyed (that is, energy is never used up; it simply changes forms) Joule (J): The basic unit of energy in the international system Power: The speed with which energy is being expended to achieve a task Renewable energy: Forms of energy that constantly replenish themselves with little or no human effort Second law of thermodynamics: The physics principle stating that the disorder of any closed system can only increase — that waste is unavoidable Sustainable energy: Forms of energy that are not only renewable but also have the ability to keep Earth’s ecosystem up and running in perpetuity Watt: Power is energy per time, and the standard unit of measurement is the watt. 1 Watt (W) = 1 joule/ second = 3.412 Btu/hr. 1 HP = 0.746 kW

Coming up with alternative energy sources is essential due to the energy demands of a growing population and dwindling supplies of fossil fuels. This list is an overview of available alternative sources of energy: Biofuels: Biofuels are made of biomass products and can be used to generate electric power as well as fuel transport. Crops and crop residues (particularly corn) are used to produce ethanol, a liquid commonly added to gasoline. Other grains such as wheat, rye, and rice are used to produce biofuels. Soybeans, peanuts, and sunflowers are used to make biodiesel fuel. Biomass: Biomass is sawgrass, mulch, corn, and so on, that can be burned in raw form or processed into liquid fuels or solid fuels. Wood and grasses are directly combusted to provide heat for boilers which can drive turbines and produce electricity. Corn, animal waste (yes, poop!), and wood pellets are burned in residential stoves to provide heat. Electric vehicles: Electric vehicles use only electricity to power the drive train. The electricity comes from batteries or fuel cells. Fuel cell–powered vehicles: Hydrogen fuel cells combine oxygen and hydrogen to produce water and electrical energy. The fuel cells are used to propel either an electric vehicle or a hybrid. Fuel cells: Fuel cells produce electrical power from nothing more than hydrogen and oxygen, are completely free of carbon, and exhaust only water and heat. Geothermal power: Heat from the earth is redistributed into a building or is used to generate electrical power. Hybrid vehicles: Hybrid vehicles are a combination of electric and internal combustion power trains. When power requirements are low, the vehicle operates in electrical mode. When more power is needed, or when the electrical batteries are near depletion, an internal combustion engine provides power. Hydropower: Dams provide high-pressure water flows that spin turbines, thereby creating electricity. Hydropower can be used on both a macro and micro (individual) level. Nuclear fission: Splitting atoms creates heat energy, which is used to generate electrical power by spinning large turbines. Solar power: Solar power uses sunshine to create both heat and electricity, as well as passive heating and cooling effects in buildings. Wind power: Windmills produce electrical power via spinning turbines.