Harnessing the Energy of Flowing Water

Hydroelectric power installations harness the energy contained in flowing water to produce electricity. Hydroelectric power is considered a renewable energy source because the water isn’t consumed during the process and because water is part of a constantly regenerating natural cycle. It also doesn’t produce greenhouse gases.

Hydroelectric power stations work when flowing water runs through a turbine, which spins the rotor of an electricity generator and creates a magnetic field that induces an electric current. 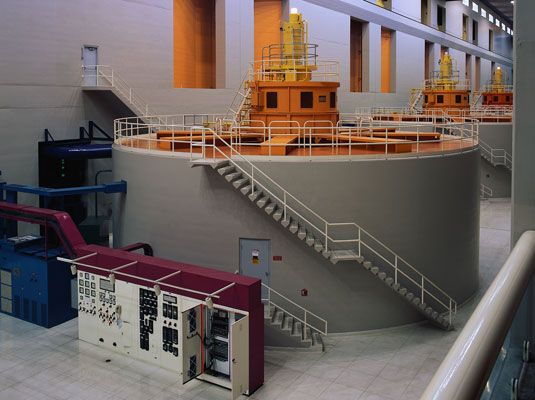 Credit: Corbis Images
A turbine spins a rotor to produce electricity from water.

Despite drawing power from a natural resource, hydropower certainly has an effect on the environment:

Hydroelectric power can be adapted for everything from large-scale utilities that provide power to cities by damming water in a reservoir to small-scale single-home systems that draw power from a turbine placed in a free-flowing stream of water.

Ian Woofenden is a senior editor with Home Power magazine, the Northwest & Costa Rica coordinator with Solar Energy International, and a wind-energy author, consultant, and instructor. He has been living off-grid with his family and several wind generators for over 35 years.