How to Compost with Worms 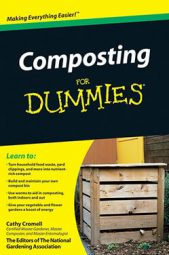 Vermicomposting is a composting method that employs certain worm species to consume and convert organic matter into a useful soil amendment and organic fertilizer. Provide moist bedding at all times for your worms to romp around in while they process your organic matter. Over time, worms consume their bedding along with your food scraps, but that's okay. By then, you'll be ready to harvest castings and provide fresh bedding.

Making bedding for your worms requires only two materials: two handfuls of native soil and newspaper or computer paper. You may also use leaves and shredded cardboard for bedding, either in place of paper or in addition to it.

Follow these steps to make your worms the sort of bedding they'll never want to leave:

Place your red wigglers on top of the moist bedding and they'll begin disappearing into it. If they seem slow to go, shine a bright light above the bin. They should dive for the dark depths.

Vermicomposting worms in your indoor bin eat the same organic goodies that you add to an outdoor compost pile, including spent garden plants, landscape trimmings, scrap paper, and kitchen scraps.

Plan on feeding your worms about half their weight in food scraps per day. When starting a new bin, offer just a handful of food until they get acclimated and start digging into your provisions. As a general guideline, feed your worms when the majority of the previous food has disappeared.

The more variety in ingredients, the better the vermicompost. Try not to overload your worm bin with fruit and vegetable skins, which may attract vinegar flies. Also, avoid lots of salty food waste, which will dry out the poor little worms. Worms are known to have food preferences (really), so experiment to see what your red wigglers prefer. Here's a hint: sweet mushy stuff like melon, pumpkin, and squash is often popular. Other good additions include

Just as there are items that shouldn't be added to a regular compost pile, the following items aren't appropriate worm food:

Chopping scraps into 2- to 4-inch (5- to 10-centimeter) bits speeds the decomposition process in your vermicomposting bin, just as it does in your outdoor compost pile. However, it isn't always essential if you aren't in a hurry and your bin has been functioning well.