By: Denise Sutherland and Mark Koltko-Rivera and
Updated: 03-26-2016
From The Book: Cracking Codes and Cryptograms For Dummies 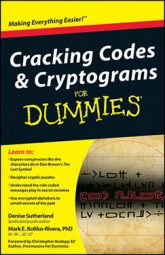 Freemasons have used ciphers since at least the 18th century. The Freemason’s Cipher is sometimes called the Pigpen Cipher, because the alphabet is written into a grid of lines, which may look like pigpens, and a cross shape from two diagonal lines. A letter is enciphered by drawing the shape of the cell that encompasses it. Freemasons learned one of the many versions of this cipher as part of the Royal Arch initiation.

Here are the main reasons Freemasons use ciphers:

The Grand Lodge style of Freemasonry began in 1717 in London, England, and spread to France in fewer than ten years. In France, Freemasons experimented with the development of so-called high degrees, ritual initiation ceremonies that somehow went beyond the first three degrees of Freemasonry.

These high degree ceremonies were plays that enhanced a Mason’s experience and interaction with the legends, for example, of the Temple built by King Solomon. Some believe that the French invented a degree called the Royal Arch, as a kind of completion (keystone) of the third or Master Mason degree.

However the Royal Arch was developed — and early Masonic records are notoriously incomplete — history suggests that the Royal Arch degree was being conferred in London in the 1740s. When it comes down to it, the Freemason’s Cipher (in any version) is a straight substitution cipher, so you can solve it by substituting a letter for each symbol.

Denise Sutherland is a syndicated puzzle author. Her puzzles appear in a range of publications, including the Reader's Digest Mind Stretchers series, and she is the author of Word Searches For Dummies.

Mark E. Koltko-Rivera, PhD, is a 32degree Freemason and expert on the major symbols and ceremonies of Freemasonry. Using this expertise, he analyzed prepublication clues to uncover and blog about key elements of The Lost Symbol. He co-hosts the weekly podcast Masonic Central.