The Basics of Cribbage

Cribbage relies on experience and intuition rather than strict mathematical calculation. In a given situation, one card may be the right one to play, and another may be the wrong card, and you may have no way to calculate which card is best. Cribbage is also a fast game; experienced players can complete a game in 10 or 15 minutes. You may start playing Cribbage with other relatively inexperienced players because slow play isn’t encouraged.

Cribbage is a finicky game that features many rules and regulations, and it may seem that a rule of etiquette governs almost every aspect of the game. Cribbage also has a vocabulary all its own, which means that you need to know a few specialized words in order to play.

To play Cribbage, all you need are the following:

You score points in Cribbage in two distinct phases. First, there is the play of the cards; second, you score the points in your hand. You get opportunities to record points during both phases of the game.

Dealing the cards and getting started

To start the game, both players cut the deck, and whoever draws the lowest card is the first dealer. The other player becomes the pone, which is just a crazy Cribbage term for non-dealer. The deal alternates for each hand in the game thereafter.

For every hand, the dealer shuffles the entire deck and offers the cards to the pone to cut. The dealer then deals six cards face-down, one at a time, to both players and puts the rest of the deck, or the stock, in the middle of the playing surface.

Each player picks up the six dealt cards and discards two cards face-down from the six. Those four cards go into the crib, forming a third hand of four cards that the dealer gets to score. (However, the four cards in the crib play no part in the first phase of the game in which the cards are played out.) The dealer now has two hands with which to score points, as opposed to the pone’s one hand.

After both players decide which four cards to keep, the pone cuts the remaining cards of the stock, and the dealer turns over the top card of the cut deck to reveal the upcard, or starter. This card essentially becomes part of all three hands — the dealer’s, the pone’s, and the crib. The starter card doesn’t take any part in the playing out of the hand, though.

If the upcard is a jack, the dealer scores 2 points, known as two for his heels. The dealer must claim and record these points before any cards are played.

The standard Cribbage board has four rows of 30 holes. 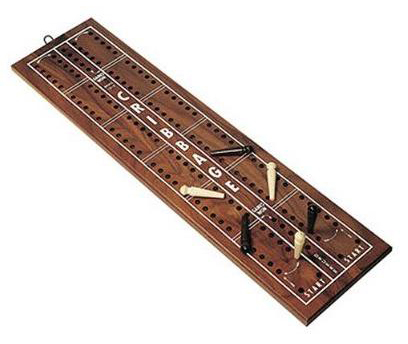 The object of the game is to go around the two tracks (or rows) the same way a horse goes around an oval in a horse race, completing the circuits before your opponent does. Each point you score advances you one space, so you need 121 points to complete your journey and win the game.

Players each use two pegs to record their points. When you score your first points of the game, you put one peg on the board, and as you score subsequent points, you hop over the leading peg with the trailing peg so that the board always shows how many points you recorded on your last score. Beginning from the start, you move up the outside part of the track and then back down the inside track.

Say, for example, that both players have 100 points, and you’re the dealer with Q, 8, 7, 2, 5, 8. You keep 8, 8, 7, 2 and throw the queen and 5 into your crib for 15 points. When a 6 comes up as the starter, you realize immediately that you have 14 points in your hand (6 combined with an 8) and a promising crib. You’re the favorite to win, because you only need to scrape up a few points from the play. What’s more, as pone on the next deal, you have the first hand of the next game to count as well if you don’t make it to 121 on this hand. So, you must avoid giving away points, and you tackle the play as cautiously as possible. On the lead of an 8, you play your 2 rather than an 8, assuming that your adversary has another 8. If he could play an 8 to make a pair royale, the 6 points would be worth much more to him than the 2 points for the pair are worth to you.

Barry Rigal is an internationally recognized Bridge player who has won countless competitions. They include the North American Bridge Championships as well as the Camrose Trophy Home International Series, which he has won five times. Barry is also the author of the previous editions of Card Games For Dummies.