Explore Book Buy On Amazon
Poker Patience is, in theory, an undemanding Solitaire card game. It takes only a minute or two to play, and you can approach the game frivolously or seriously.

To start, you need to know the ranks of Poker hands (in other words, what beats what). In ascending order, the ranks are as follows:

Aces can be either high or low — your choice.

The objective of the game is to lay out 25 cards to form a square, five cards by five cards. In the process, you want to make ten Poker hands (five across and five down) and score as many points as possible.

The US scoring system has a major flaw (which has been corrected in the UK scoring method), based on the fact that although flushes are rarer in Poker, they're considerably easier to play for in Poker Patience than straights. To fix this problem, you can reverse the scoring table, as in the version that Barry recommends.

To start, turn over one card face-up and then go on to the next, building your grid in any direction you like — up and down or right and left.

Although you can put any card anywhere you like in the grid, and you can expand the cards out in any direction you like, each card must touch another card. Whether you put it adjacent to another card or link it diagonally by touching the corner of another card is up to you.

The best way to play (particularly when using Barry's scoring table) is for straights to be set out in one direction (vertically or horizontally) and full houses or four of a kinds in the other direction. If you take this advice and decide for straights to go in the horizontal rows, you have excellent reasons to put the cards in columns either with themselves or with numbers five less than or five more than themselves. By making this separation, you help the formation of straights.

When playing Poker Patience, sooner or later you run into a useless or unplayable card. When this happens, don't panic; all you have to do is start a junk row or junk column. Inevitably, at least one row or column won't score as much as you want it to.

Look at the layout shown here to see the game theory at work. The matrix is updated after every two cards, although each card is turned over individually. After ten cards, the basic structure is going well. The nucleus of the straights is fine on the horizontal lines, and all the pairs are matched up.

A hand of Poker Patience after ten cards.

In the following figure, you can put the 9 of spades on the bottom row, but completing the straight and collecting points always produces a warm, fuzzy feeling. 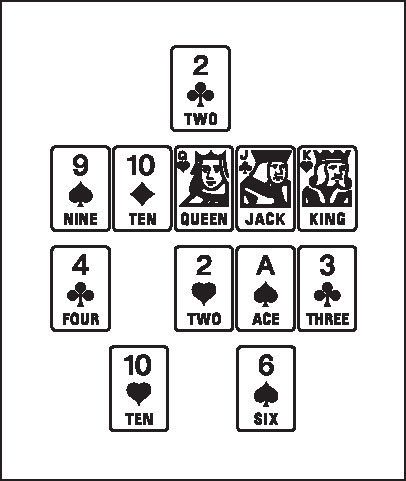 Don't be tempted by the bottom row. Go for the points!

Play continues in the following image. The 8 of hearts could've gone under the 3 of clubs, but it seems premature to abandon the right-hand column. The queen of spades scores the full house, so abandon the straight in the fourth row. 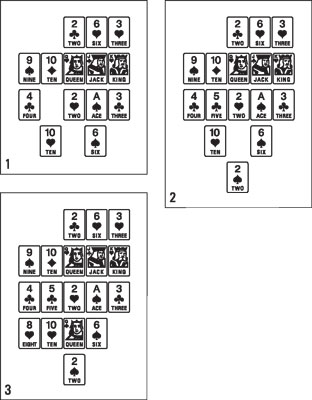 Dumping a straight to go for the higher-scoring full house.

In the next figure, the bottom row has become a junk pile. One row or column normally does. 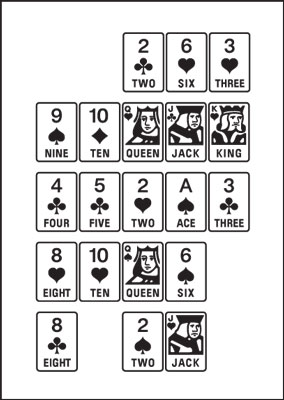 Creating a junk pile is a normal thing for Poker Patience.

In the next figure, a lucky last card allows you to scramble to respectability; two straights, two full houses, and a three of a kind are 160, and having three pairs takes you to 166. 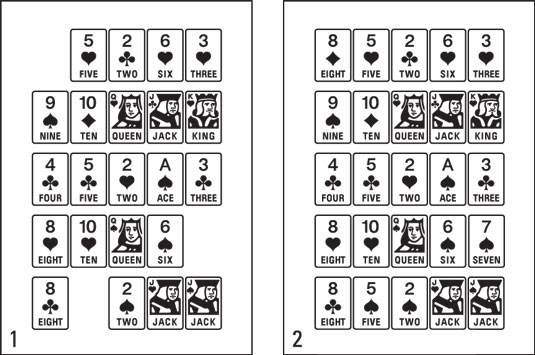 Sometimes you have to get lucky to make something out of this big mess.

After you finish playing, you can further exercise your mental agility by trying to rearrange the cards to score as many points as possible. A rearrangement is really only worth doing, however, if you have a straight flush so you can rack up big numbers. Using all the cards in high-scoring combinations (flushes or higher) is a real coup.

Some people also count the long diagonals (from top right to bottom left and vice versa) in the scoring. Planning the scores on the diagonals too carefully is pretty difficult, but it can be done — or you can just regard any score on them as a bonus. You can also play Poker Patience as a competitive game for two players or more. One player calls out the cards he draws at random, and then both players try to arrange their own grids to maximize the scores. The highest score wins.

Richard D. Harroch is an attorney and poker enthusiast. He has more than 20 years of experience in representing start-up and emerging companies, entrepreneurs, and venture capitalists. He is listed in Who’s Who in American Law and is a corporate partner in a major law firm in San Francisco. He has edited or co-authored a number of legal/business books, including Start-Up and Emerging Companies: Planning, Financing and Operating the Successful Business and Partnership and Joint Venture Agreements. Lou Krieger is the author of two guides to Texas Hold 'em, the most popular tournament poker game.