How to Divide Trump Suits in Bridge

Depending on how the trump cards are divided in a hand of bridge, you approach the game in different ways. Keep in mind that if you have eight or more cards in a suit between your hand and the dummy, particularly in a major suit (either hearts or spades), you try to make that suit your trump suit.

An eight-card fit (eight cards in a single suit between your hand and the dummy) gives you a safety net because you have many more trumps than your opponents: Your trumps outnumber theirs by eight to five. Having more trumps than your opponents is always to your advantage. You may be able to survive a seven-card trump fit, but having an eight- or nine-card trump fit relieves tension. The more trumps you have, the more tricks you can generate, and the less chance your opponents have of taking tricks with their trumps. You can never have too many trumps!

During the bidding, you may discover that you have an eight-card fit divided four-four between the two hands. Try to make such a fit your trump suit. A four-four trump fit almost always produces at least one more trick in the play of the hand, as opposed to notrump.

At a notrump contract, the four-four fit in this image takes four tricks. At notrump, when each partner has four cards in the same suit, four tricks is your max. 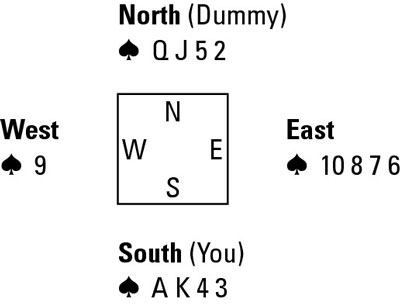 However, when spades is your trump suit, you can do better. Suppose that your opponents lead a suit that you don’t have:

This image shows examples of a 5-3 fit, a 6-2 fit, and a 7-1 fit. Good bidding uncovers eight-card (or longer) fits, which makes for safe trump suits. There’s joy in numbers.