Explore Book Buy On Amazon
Although Garry Kasparov eventually eclipsed Anatoly Karpov, no one would dream of leaving Karpov off this list. Karpov won the championship by default when Bobby Fischer refused to defend his title.

Many people considered this a black mark on Karpov's record because Karpov never actually won the title by playing a championship match, but that's silly. Perhaps this event is what spurred him on to incredible achievements in tournament chess in the 1970s and '80s.

Only the great Viktor Korchnoi was able to test him in match play, but even he couldn't beat Karpov, and Karpov dominated the tournament scene. From 1978 to 1981, Karpov played in ten major tournaments and finished clear first or in a tie for first in nine of them. Karpov was clearly the dominant player after Fischer and before Kasparov.

Karpov has moved up on this list because he battled so long and hard against Kasparov and competed on an almost equal level when they were both at their best. Elevating my estimation of Kasparov's greatness forced me to reconsider Karpov's.

Karpov was renowned for his positional genius. His pieces and pawns nearly always seemed to sit confidently on exactly the right squares. His "quiet" moves seemed to suck the life out of his opponent's game. Playing him has been compared to being slowly suffocated by a boa constrictor. But Karpov could produce a flashy combination as well — if it was really the best move!

In the position from 1977 in the figure, Karpov is black against the Italian champion Stefano Tatai, whose white pieces have been restricted to the back three rows of the board. Importantly, Tatai's king is not yet castled. Cover the moves following the figure with your hand and, before going on, try to find Karpov's next move. We're starting at move 23 of the game. (Check out Understanding Chess Notation if you need help with reading the moves.) 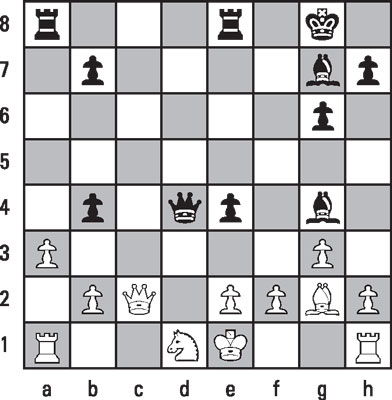 Black is about to play a surprising move

What now? Obviously, 26… . Rxc2 27. Kxc2 would have left white ahead a whole rook. Ah, but wait, black can throw his other rook into the game with a check!

Black attacks the white knight on d1 three times, and it's guarded only twice. So …

This move is much stronger than capturing the pawn on b7.

30. Kb3 would have capitulated even more quickly after 30… . Be6+, and it would have been checkmate in no more than three more moves. 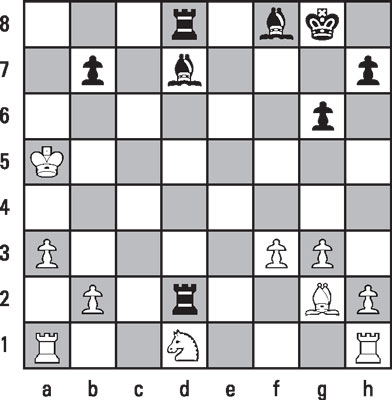