Adapting Recipes for the Slow Cooker

By: Tom Lacalamita and Glenna Vance and
Updated: 03-26-2016
From The Book: Slow Cookers For Dummies 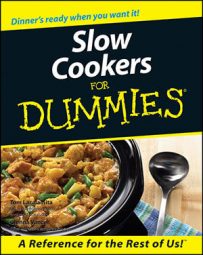 You can adapt a lot of standard recipes to work in your slow cooker. Recipes that do work in the slow cooker do require some changes in relation to ingredients, the amount of liquids, and length of cooking: