By: Meri Raffetto and Rosanne Rust and
Updated: 03-26-2016
From The Book: Glycemic Index Cookbook For Dummies 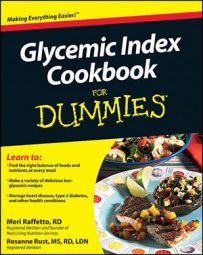 Pumpkin soufflé is a nice change from pumpkin pie, and it works well in a low-glycemic diet. Most soufflé recipes already use low amounts of sugar, and pumpkin itself is a low- to medium-glycemic food, depending on how much you use.

Meri Raffetto, RD, is a registered dietitian and recognized professional in the area of nutrition and wellness; she has been featured in Healthy Living Magazine and the Chicago Tribune. She is the founder and CEO of reallivingnutrition.com and author of The Glycemic Index Diet For Dummies.