The Types of Diabetes

By: American Diabetes Association and Sheri R. Colberg and
Updated: 02-20-2018
From The Book: Diabetes & Keeping Fit For Dummies 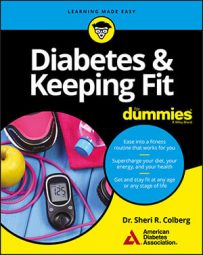 Explore Book Buy On Amazon
Diabetes comes in many forms — type 1, type 2, and gestational are the most common forms — as well as being tied to the related condition prediabetes. The following discussion gives you a glimpse into these conditions.

About 5 to 10 percent of people have type 1 diabetes, which equates to around 1.25 million American children and adults. Prior to having this name, type 1 diabetes used to be called insulin-dependent diabetes, which is accurate because you have to take insulin if you have this type. But that name got confusing and was dropped because many people with type 2 diabetes use insulin as well.

Early on, type 1 was called juvenile onset diabetes because three-quarters of all cases are diagnosed in youth under 18. You can develop type 1 diabetes at any age, though, and most people living with type 1 are adults who inject or pump insulin daily to survive. Because adults also get type 1 diabetes, this term was inaccurate and misunderstood and was, therefore, abandoned decades ago.

Type 1 diabetes results from a relative insulin deficiency, which occurs after the body's own immune system destroys the beta cells of the pancreas that make insulin. Although the trigger for this autoimmune response is unclear, it's likely due to a combination of a genetic predisposition and environmental factors. Some causes under investigation include exposure to certain viruses, early introduction of cow's milk or other proteins in the diet of infants, and lack of vitamin D.

How rapidly type 1 diabetes develops is quite variable; it's rapid in some individuals (mainly infants and children) and slow in others (mainly adults). In either case, the symptoms of elevated blood glucose first appear when only about 10 percent of the insulin-making capacity of the pancreas remains.

About 90 to 95 percent of cases of diabetes are type 2 diabetes, which used to be called non-insulin-dependent diabetes and adult onset diabetes. Most people diagnosed with type 2 are adults, but it has become more common among teenagers with the current obesity epidemic and prevalence of sedentary lifestyles. It's largely related to lifestyle habits that promote insulin resistance and other bodily changes that lead to high blood glucose levels.

Type 2 diabetes primarily results from an inability of insulin to work well enough to lower blood glucose to normal levels, a state of insulin resistance. However, most people with type 2 diabetes suffer from some degree of beta cell burnout, which leads to a diminishing release of insulin over time and rising blood glucose levels. The beta cells in the pancreas that make insulin lose some or all of their ability to produce insulin when exposed to high levels of blood glucose over time.

If you develop type 2 diabetes, you likely have insulin resistance, paired with insulin secretion that is maximal but insufficient. In other words, your body can't make enough insulin to fully overcome your body's resistance to it.

Many consider type 2 diabetes a less severe condition than type 1, but type 2 is more complex in its origin. With this type, you likely have an underlying genetic susceptibility that, when exposed to a variety of social, behavioral, and/or environmental factors, unleashes a latent tendency for diabetes. In other words, diabetes genes are triggered by combined environmental and lifestyle factors, such as inactivity, poor eating habits, weight gain, exposure to pollutants, vitamin and mineral deficiencies, and more.

Although having a family history of type 2 increases your risk, the recent, unprecedented increase in type 2 diabetes cases suggests that a bigger cause is a combination of factors that increase insulin resistance, such as a sedentary lifestyle and a poor diet. Many people who get this type of diabetes don't have any relatives with it. Having a parent, sibling, or other close relative who has it increases your risk of developing it, though.

Particularly when you're first diagnosed with type 2 diabetes, you may be able to manage your blood glucose levels effectively or even reverse your diabetes by making lifestyle changes, such as exercising regularly and eating a better diet.

Women can develop gestational diabetes during pregnancy if their blood glucose levels rise too high, which is most likely to happen during the second or third trimester. Pregnancy hormones make the mother more insulin resistant — to spare glucose for the developing fetus — but her blood glucose can rise as a result.

Managing blood glucose during pregnancy is important because elevated levels aren't good for the mother or the baby. Unborn babies make their own insulin during the third trimester and can get too large (over 9 pounds) from gaining extra fat when exposed to high levels of glucose, making the birth process difficult for the mother and the child. Babies can also have other health problems if the mother's glucose levels aren't managed well enough.

If you have ever given birth to a baby weighing 9 pounds or more, then you likely had gestational diabetes during your pregnancy (whether diagnosed or not).

Although gestational diabetes usually disappears after the baby is born, it increases the mother's risk for developing type 2 diabetes later in life.

Prediabetes is basically a relative state of insulin resistance. About 40 percent of adults between 40 and 74 years old who were screened in 2000 were diagnosed with prediabetes. In 2014, 86 million Americans age 20 and older had prediabetes, up from only 79 million in 2011. That is a huge number of people affected by this condition.

Even though blood glucose levels aren't in a diabetic range yet with prediabetes, having prediabetes puts you at high risk for progressing to type 2 diabetes at some point in your lifetime. What's more, you can develop some of the complications usually associated with diabetes, like nerve damage in your feet, heart disease, and stroke, while only having prediabetes.

You can reverse prediabetes with improvements to your lifestyle. The same changes that help manage type 2 diabetes — regular exercise, a more healthful diet, and fat weight loss — can help eliminate prediabetes and prevent its progression into full-blown diabetes.