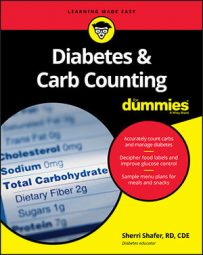 Explore Book Buy On Amazon
A common misconception about alcohol is that many people assume alcohol turns to sugar, or alcohol will raise their blood-glucose levels. Actually, hard liquor doesn't have any carb, wine is very low in carb, and beer has about as much carb as a piece of bread: However, if your drink comes with a cherry and an umbrella, it has carbs, probably lots. Mixed drinks can be especially high in calories when you consider the alcohol and the mixers. Sugary mixers, soda, or juices can lead to a rise in blood glucose, at least temporarily, because the liquid carbs get into the bloodstream fast. But blood glucose may end up plummeting later.

Insulin users may wonder whether they should "cover the carbs" in their alcoholic beverages with insulin. That may work okay at mealtime for one drink: for example, if you have a beer with a carb-containing dinner. Say the beer has 13 grams of carb and the meal has 55 grams of carb. You may be fine counting the total as 68 grams of carb and taking the appropriate dose of insulin. The food and the insulin both last about four hours. The alcohol should be done processing within about two hours. That's why you're less likely to get low blood sugar if you have your drink with a meal.

However, drinking on an empty stomach is a different story. Consider this: If you take insulin to cover the carbs in an alcoholic beverage, the rapid-acting insulin will last about four hours, but the liquid carbs in a beer or in carb-containing mixers will be digested very quickly — within 15 minutes of drinking. On an empty stomach, alcohol has a blood-glucose-lowering effect for two or more hours per drink. The carbs won't last as long as the alcohol and the insulin, which increases the risk of having hypoglycemia.

Talk to your doctor about insulin and alcohol. The discussion in this book is conceptual and not meant to provide insulin dosing instructions. Medication use and adjustments must be discussed with your doctor.

Some alcoholic beverages have carbs, but all of them have calories. Alcohol has 7 calories per gram, protein and carbohydrate have 4 calories per gram each, and fat has 9 calories per gram, so fat and alcohol are the most calorically dense. Alcohol can contribute to weight gain, so it's important to account for the calories consumed. The table lists popular alcoholic beverages and their average carb and calorie counts. Extra stout beers would have more carbs and calories than listed, and beers in general vary by brand. Mixed drinks have a wide range of carb and calorie counts — too wide to mention here — but some frou-frou drinks push upwards of 500 calories up that straw.

The Carb and Calorie Counts of Common Alcoholic Beverages

The numbers listed in the table represent some averages across the categories mentioned, but there is certainly variation. Check labels, look online, or contact manufacturers for details.