How to Order Coffee

Explore Book Buy On Amazon
Standing at the counter at your local coffeehouse and deciding what you want can feel overwhelming. Ordering coffee was easier before everybody became a connoisseur. Do you want regular or decaf? Cream, sugar, or black? That was about it.

However, the world of espresso beverages introduced an entirely new language to the menu. Now, you really need to know how to order an espresso or espresso-based beverage. The foundation to nearly all the following drinks is the same:

Espresso solo or doppio is the result when a shot or shots are pulled. Nothing else is added. The crema (the lighter-golden creamy layer on top) should always be obvious. The crema is created when hot water hits the ground coffee bean oils and floats atop the shot; its smooth creamy bubbles give a good indication of the quality that lies below in the body and heart layers. 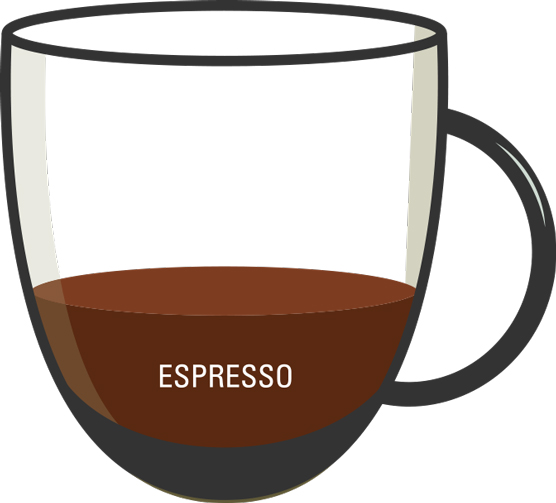 Translated from the Italian, a ristretto is a restricted espresso shot, which means it’s smaller and stronger, because it uses less brewing water and a slightly finer grind to ensure the extraction time is adequate.

A lungo is a long-pulled espresso. It involves using a bit more water, so it ends up a bit weaker. Sometimes afficionados look down on this drink, but with the right grind — often a lighter-roasted espresso coffee, ground slightly coarser — this can be a delicious beverage.

The name macchiato, which means marked in Italian, comes from espresso’s Italian heritage. Just add a bit of milk and what you get is espresso with a dollop of milk on top. The more recent trend with this beverage is to add more milk than before. 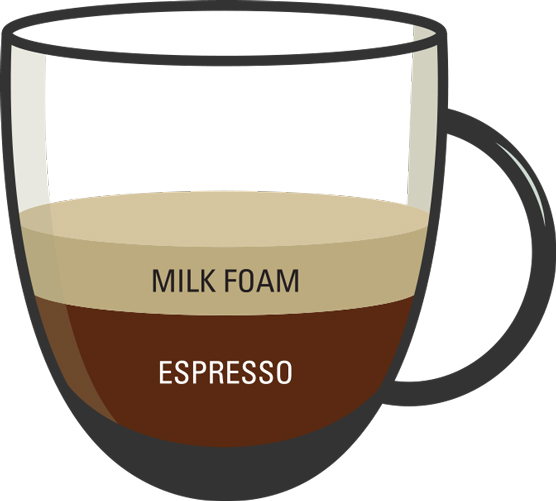 You may be confused because some roasters broadly market their beverages as macchiatos, but the drinks bear little resemblance to a real macchiato. If you’re not sure what you’re ordering, ask the barista to explain the ingredients.

Originally derived from a Viennese, not Italian, beverage and dating to the 19th century, the kapuziner was a brewed coffee-and-steamed-milk combination that was poured in parts (espresso shot and steamed milk) that ended up the color of Capuchin monks’ robes. The Italians and their advancements with espresso machines, great craft, and cafés gave a robust push to the drink you know today.

The cappuccino is served in a small cup and consists of the following (the ideal amounts of which are subject to great debate): 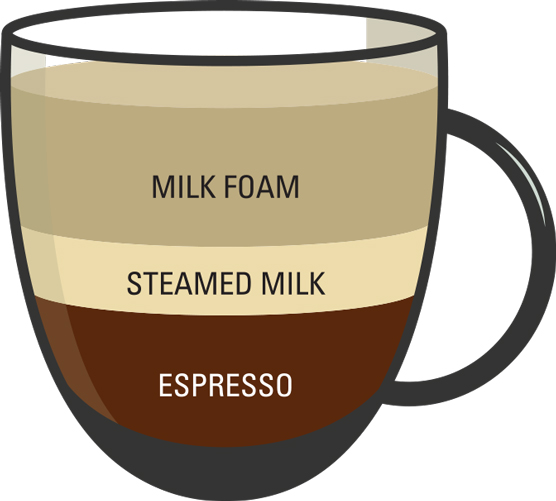 Similar to the modern variation of the macchiato, today you can find an incredible variation in the cappuccino, with some coffee shops offering beverages as large as 20 ounces and calling them cappuccinos. Technically, they aren’t, because the tradition of a small beverage is a well-established one.

The latte (see the following figure)—a top choice among espresso coffee drinkers globally—isn’t Italian in origin. Rather, it’s the result of coffee drinkers wanting to add some steamed milk to the seemingly strong and bitter coffee to mellow the flavor. 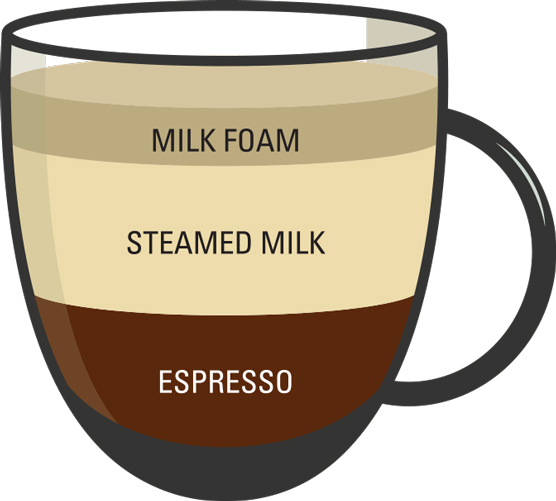 In fact, order a latte in Italy without the word caffé, and you’ll just get milk. I think of this beverage more as a lightly coffee-flavored milk drink, and I often enjoy a variation with an extra shot or two of espresso to boost the coffee flavor.

Replace the steamed milk with steamed half and half for a caffé breve. 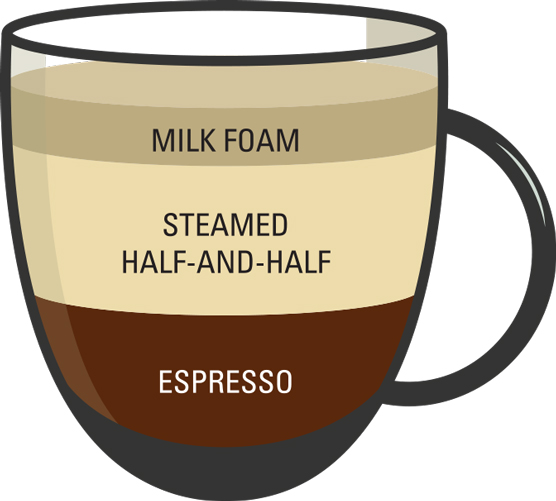 Adding some chocolate syrup to your espresso and steamed milk makes your drink a mocha. You can ask your barista for a dollop of whipped cream if you’re decadent. 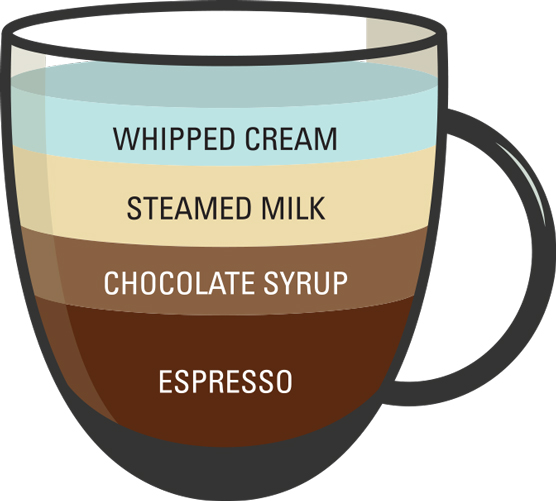 The flat white originated in New Zealand or possibly Australia. No matter where it came from, the flat white has achieved global recognition as a result of the proliferation of cafés and burgeoning consumer awareness. A flat white is really a latte—often a smaller one that rarely features any foam, just well-steamed milk and perhaps a smidge of foam. 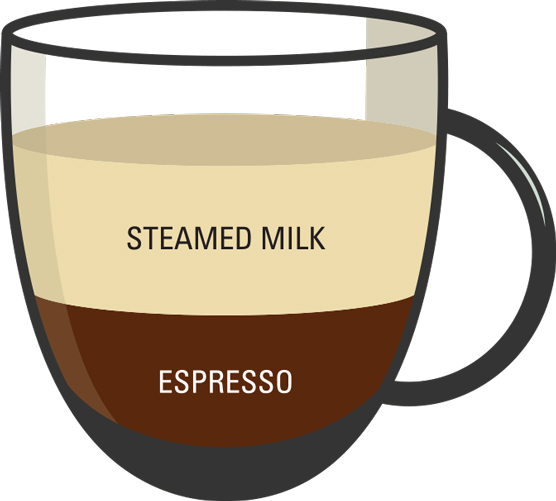 American soldiers serving in Italy in World War II wanted a beverage more closely resembling the brewed coffee experience they liked at home as opposed to Italian espresso. The result was the Americano, which is simply an espresso with hot water added. 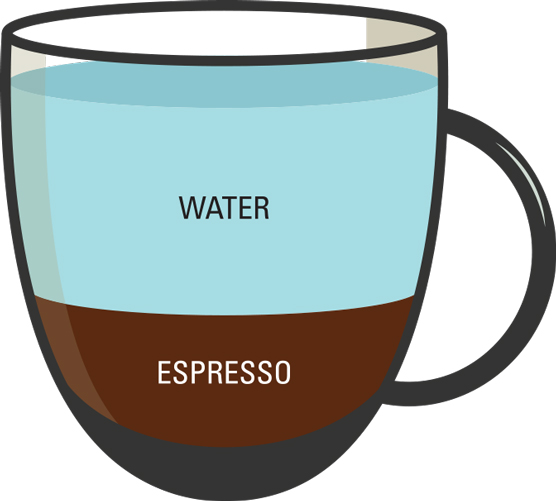 Originating in Spain, the cortado highlights both slightly weaker espresso shots (often found in Spain because Spaniards’ preferred recipe features a longer brew) and steamed milk. A cortado is served in a small glass and consists of about 30ml of espresso with an equal portion of steamed milk.