How to Avoid Spoilage When Canning and Preserving Foods

By: Amelia Jeanroy and Karen Ward and
Updated: 03-26-2016
From The Book: Canning & Preserving For Dummies 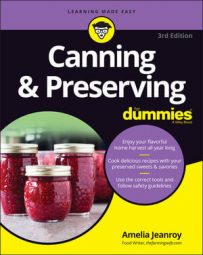 Food spoilage is the deterioration in canned or preserved food that makes your food unsafe for eating. Mold, yeast, bacteria, and enzymes are the spoilers. Ingesting spoiled food can cause a wide range of ailments, depending on the type of spoilage and the amount of food consumed. Symptoms vary from mild, flulike aches and pains to more-serious illnesses or even death.

Microorganisms (mold, yeast, and bacteria) are independent organisms of microscopic size. Enzymes are proteins that exist in plants and animals. Some of these create spoilage that can’t be seen (like botulism), while others (like mold) make their presence known visually.

Mold is a fungus with dry spores. Poorly sealed jars of high-acid or pickled foods are perfect locations for these spores to set up housekeeping. After the spores float through the air and settle on one of their favorite foods, they start growing. At first you see what looks like silken threads, then streaks of color, and finally fuzz, which covers the food. Processing high-acid and pickled food in a water-bath canner destroys mold spores.

Don’t eat food that’s had fuzz scraped off of it. This was thought safe at one time but not anymore. Mold contains carcinogens that filter into the remaining food. Although the food may appear to be noninfected, ingesting this food can cause illness.

Yeast spores grow on food like mold spores. They’re particularly fond of high-acid food that contains lots of sugar, like jam or jelly. They grow as a dry film on the surface of your food. Prevent yeast spores from fermenting in your food by destroying them in a water-bath canner.

Bacteria are a large group of single-celled microorganisms. Common bacteria are staphylococcus and salmonella. Botulism, the one to be most concerned with in canning, is the most dangerous form of bacteria and can be deadly. It’s almost undetectable because it’s odorless and colorless. Botulism spores are stubborn and difficult to destroy.

Botulism spores hate high-acid and pickled foods, but they love low-acid foods. When you provide these spores with an airless environment containing low-acid food, like a jar of green beans, the spores produce a toxin in the food that can kill anyone who eats it. The only way to destroy them in low-acid food is by pressure canning.

For safety’s sake, before eating any home-canned, low-acid food, boil it for 15 minutes from the point of boiling at altitudes of 1,000 feet or lower. For altitudes above 1,000 feet, add 1 additional minute for each 1,000 feet of elevation.

Boiling does not kill the botulism bacteria. Symptoms from ingesting botulism-infected food occur within 12 to 36 hours after eating it. Symptoms include double vision and difficulty swallowing, breathing, and speaking. Seek medical attention immediately if you believe you’ve eaten infected food. Antitoxins are available to treat this poisoning, but the sooner, the better.

Enzymes are proteins that occur naturally in plants and animals. They encourage growth and ripening in food, which affects the flavor, color, texture, and nutritional value. Enzymes are more active in temperatures of 85 to 120 degrees than they are at colder temperatures. They’re not harmful, but they can make your food overripe and unattractive while opening the door for other microorganisms or bacteria.

An example of enzymes in action occurs when you cut or peel an apple. After a few minutes, the apple starts to brown. Stop this browning by treating the cut apple with an antioxidant solution.