Practically all the most famous grape varieties used in the world's wines are French varieties, meaning that they either originated in France or became famous through their expression in French wines. These varieties include Chardonnay, Merlot, Sauvignon Blanc, Cabernet Sauvignon, Pinot Noir, and Syrah, among many others.

Over the centuries, different grape varieties have acclimated to certain regions of France. In some regions, winemakers make blended wines, from several grape varieties; in other regions, the wines derive from a single variety.

Wine lovers often use a certain shorthand in talking about French grapes:

The wines of Bordeaux, the South of France, and the Rhône Valley (the larger, Southern Rhône, at least) are blends, made from several grape varieties in varying proportions. When winemakers from other parts of the world use these varieties together, they sometimes describe their wines as being “Bordeaux blends” or “Rhône blends,” a more convenient lingo than naming all the varieties used. 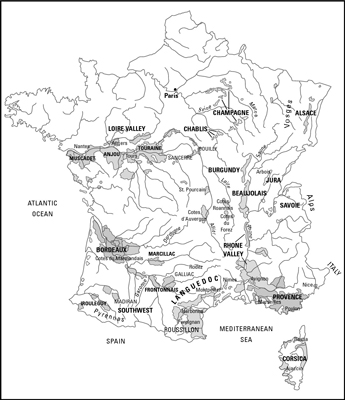 The many wine regions of France.