Make Double-Fold Binding for Your Quilt 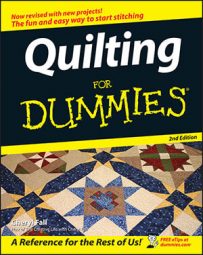 The double-fold binding method uses a single layer of fabric on the edges of the quilt, making it more economical than traditional bias binding. This type of bias binding isn’t quite as durable as traditional binding, so use it for projects that won’t be handled or washed frequently, such as wall hangings and table runners.

Double-fold binding is great for anything that has rounded corners because the natural stretch of the bias along with the single layer at the edge helps you round corners smoothly.

Pressed for time? If so, pick up double-fold bias tape in any fabric store. It comes in a variety of colors and even some prints, such as gingham. Look for packages marked “Extra-Wide Double-Fold Bias Tape.” Because this premade binding is sold in packages containing 2 to 3 yards of bias tape, you’re likely to need several packages.

If you’re determined to make your own double-fold bias binding, follow these steps:

Cheryl Fall is the author of 12 how-to books, has designed more than 2,500 projects for publication, and is the host of The Creative Life with Cheryl Fall on PBS.