After you figure out your full retirement age, you can get a ballpark idea of your monthly benefit. Currently, the average retirement benefit is about $1,328 per month (in January 2015), but benefits go much higher, depending on your earnings history and when you begin collecting.

It’s easy to get at least a rough estimate of your retirement benefits. Just use one of the SSA’s online calculators — the Social Security Quick Calculator or the Retirement Estimator. The Retirement Estimator is especially useful, because it also gives you projected amounts for retiring early at 62, waiting for the full retirement age, or delaying all the way until 70. (You also can get estimates customized to your personal situation by using Whether the Social Security numbers look small, large, or in between, remember that Social Security is meant to be just one part of your financial foundation.

These differences can add up to real money over the years — or decades. Consider the following example:

Elisa was born in 1953 and wants to know how she would be affected by choosing different dates to retire. She goes to the Retirement Estimator tool and quickly types in some basic information, including her name, Social Security number, state of birth, and mother’s maiden name. She also plugs in the $160,000 she earned last year. The Retirement Estimator lists the estimated payments she would get for retiring at three different ages.

Elisa knows that longevity runs in her family, so she wants to find out how much she’ll collect from Social Security if she lives to 90. To get the answer, she calculates the number of months she would receive benefits in three different cases — starting at 62 (336 months), starting at 66 (288 months), and starting at 70 (240 months). Then she multiplies the number of months by the estimated benefit provided by the online tool.

Your decision on when to begin retirement benefits makes a real difference in your monthly income. The numbers here are based on a retirement age of 66 and a monthly benefit of $1,000. They may differ based on your year of birth and other factors. 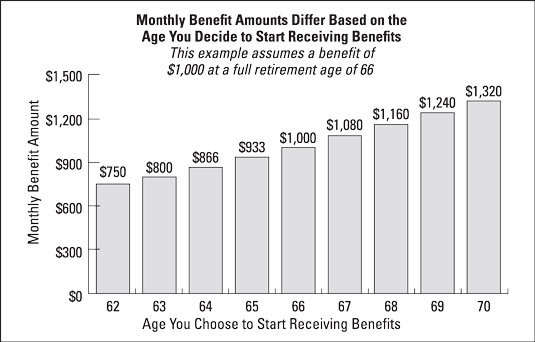 If you were born on January 1, refer to the previous year.

Jonathan Peterson is a former executive communications director at AARP and an award-winning journalist. His interest in Social Security began when he covered the political debate that led to major reforms in 1983. He is a former economics and politics correspondent for the Los Angeles Times. AARP is the largest nonprofit, nonpartisan organization in the United States dedicated to empowering people as they age.