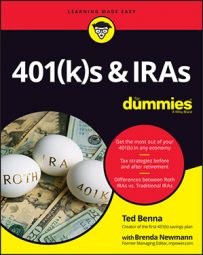 Explore Book Buy On Amazon
When you’re ready to start setting aside (or withdrawing) money for your retirement — whenever that might be — take a look at the valuable benefits of each of these types of retirement plans. Consider investment recommendations including bundling, pre-tax contributions, and how life circumstances may change your opportunities.

Planning changes for your retirement years

Reducing your expenses during your retirement years is an important way to reduce financial pressure. Think about ways your life can change and make plans for a smooth transition by considering these points:

Adding advice on your retirement investments with mPower

The first effort to provide actual investment advice to 401(k) participants was an online version offered by mPower. Rather than just educating participants about investments, mPower offered them investment recommendations. I served on their board both as a member and as a consultant.

One of the main challenges was getting the major 401(k) service providers to integrate investment advice into their services. The head of one of the major service providers told us there wasn’t any way they wanted an independent firm telling participants they serviced how to invest because this could adversely impact the fees they received. But things changed as participant interest in advice grew and when the service providers realized this was a way to make more rather than less in fees. They accomplished this by adding an additional layer of fees — usually in the 0.5 to 1.0 percent range.

Around this time, I was speaking at a meeting hosted by one of the largest service providers. The audience was a group of financial advisors. A representative of the service provider explained to the advisors how they could receive an additional 0.25 percent in fees by adding investment advice. This is when 401(k) fees for smaller plans pushed into the 2 to 3 percent range.

The same thing has occurred with IRAs offered by financial advisors who are generally called wealth managers today. Their typical offering is called a managed account. These accounts are generally a prepackaged mix of mutual funds with total fees in the 1.5 to 2.0 percent range. They include a fee on top of the normal mutual fund fees, often called a wrap fee.

A small employer recently used a guide I have prepared to shift from a 401(k) to an IRA-based plan. The employer eliminated more than $1,500 in annual fees, and annual fees for participants were reduced from 2.75 percent to 0.15 percent. The new plan is also much easier for the employer to administer, and the participants have much broader investment options.

There are four different guides that contain detailed information about how to set up an IRA-based plan:

Learn more about the guides at [email protected].

Benefitting from bundling for 401(k)s

Bundling wasn’t an option in the early days of 401(k)s. Administration of a typical 401(k) included several different organizations to handle the maintenance of participant accounts and all the other services required to administer the plan. Investments were usually limited to two or three options — an equity mutual fund, a Guaranteed Income Fund (GIC) issued by an insurance company, and employer stock. Participant accounts were updated monthly, quarterly, semi-annually, or only once a year. Participants received paper statements four to six weeks after the accounts were updated.

Participants had to split their investments between these funds in 25 percent multiples: 100/0, 75/25, 50/50, 25/75 or 0/100. Requests to change investments had to be submitted in writing to the HR department and then submitted to the record keeper. Investment changes occurred only on the valuation dates when participant accounts were updated. This was a slow, cumbersome, error-prone process; however, fees were unbundled. Employers typically paid all recordkeeping and administrative fees and participants paid only the investment fees

By the mid-1980s, the major mutual fund companies (Fidelity, Vanguard, T. Rowe Price) and some insurance companies (MassMutual, New York Life, Principal Financial) realized 401(k) plans were generating a lot of money to be invested. They began to offer bundled services. A company with a 401(k) plan could select one of these entities to handle all functions — record keeping, investments, and all other administrative procedures. Services weren’t the only things that were bundled. Fees were also bundled and all paid by participants.

Ted Benna is commonly referred to as the “father of 401(k)” because he created and gained IRS approval of the first 401(k) savings plan.

Ted Benna is commonly referred to as the “father of 401(k)” because he created and gained IRS approval of the first 401(k) savings plan.