Not All Mortgage Insurance is Tax Deductible

By: Eric Tyson and Robert S. Griswold and
Updated: 04-04-2018
From The Book: Mortgage Management For Dummies 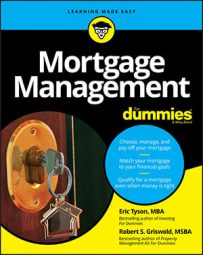 For tax year 2017, for example, if your income exceeds $287,650 (for married couples filing jointly, it’s $313,800), you lose some of your Schedule A itemized deductions (which includes mortgage interest and property taxes, too).

For example, if you’re married and your itemized deductions, excluding mortgage interest, total to $10,000, then $2,600 of the mortgage interest you pay is essentially not tax deductible because you automatically qualify for the standard $12,600 deduction if you elect not to itemize.

Last but not least, IRS tax laws limit the amount of mortgage interest on your primary and a secondary residence that’s tax deductible to no more than the interest on up to $1 million of mortgage debt. Also, the interest is allowed to be deducted only on debt equal to the amount you borrowed when you originally bought your home plus $100,000.

Eric Tyson, MBA, is a financial counselor and the bestselling author of Investing For Dummies, Personal Finance For Dummies, and Home Buying Kit For Dummies.