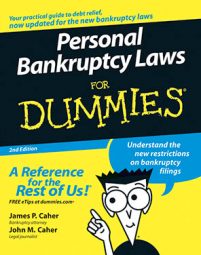 If you're thinking about personal bankruptcy, you're looking at some hard questions and harder choices, especially under the newest bankruptcy law. Answer the questions in the following list to figure out whether you should consider bankruptcy and what type: