On a chart, you see the price pattern of a stock, commodity, or currency make some short-term moves against the long-term moves of the trend. This oscillating pattern is akin to the human experience of moving toward a long-term goal, but on the path, people often make reference to taking “three steps forward and two steps back.”

The figure gives a typical example of this oscillating trend pattern. The extended general direction of the market is up, but short-term moves occur against the trend. 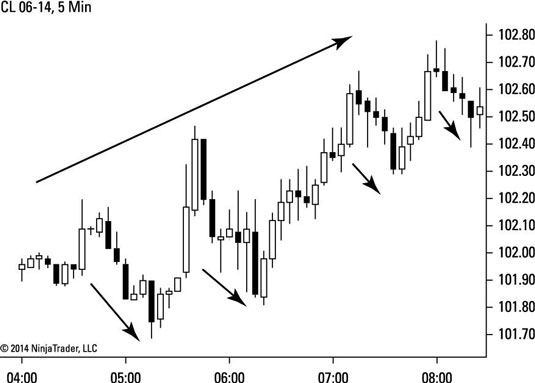 These fluctuations in the trend occur because the people trading the markets fluctuate in their optimism and pessimism based on the two primary emotions traders experience: fear and greed. Traders generally buy into a market because they’re optimistic and have a degree of confidence that they’ll make money.

The more the market moves in their direction, however, the emotions of fear and greed begin to creep into their thoughts — fear that the market may turn against them and they’ll lose their money, and greed regarding the money they’ve already made and want to now take out of the market and put in their pocket.

After the market moves up for a while, many traders will sell all or part of their position. They want to lock in some profits and reduce their risk by reducing the amount of money they have exposed in case the market turns against them.

Other traders will feel, for a variety of reasons, that it’s time for the market to go down. When they see the market stalling out because people who bought into the market are now selling, they take this opportunity to short the market, thus adding more volume to the downside and pushing the market down against the trend.

Shorting the market refers to the practice of selling before you buy. Instead of buying low and selling high, you reverse the order. For example, if you believe the market is going to go down, you can sell first at a high price and then buy back the position later at a low price.

You’re still buying low and selling high but in reverse order! This may seem strange, but it’s a common practice. In the stock market, you borrow the stock through your broker (and usually pay a fee to do so) and also post margin (collateral).

After the market moves down a bit, the traders who are still convinced that the market is in a long-term uptrend will come back in and buy because they’re getting a lower price. This can cause the short-term move down (called a correction) to stall and the market to begin going up again with a new impulse move. Corrections are price moves against the trend; impulse moves are moves in the direction of the trend.

This is a simplification of what causes the oscillations of price action as markets trend. The following figure provides a visual reference for impulse and correction moves. 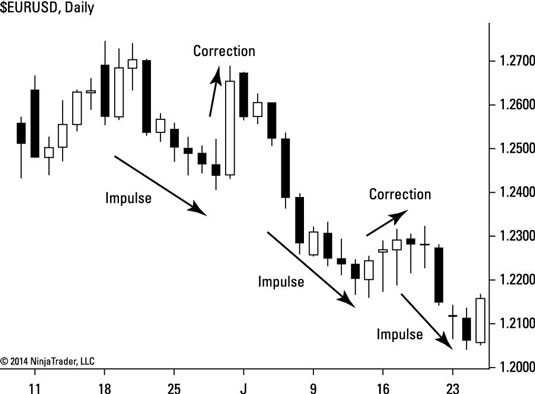