The theory of the market moving in waves is a valid and useful concept to keep in mind. However, you may prefer to trade with completely objective rules.

The following method for measuring waves doesn’t impose a five-wave maximum rule for each trend (as the Elliot wave theory does). It simply defines a mathematically objective definition for what a wave is and allows a trend to have as many waves as it decides to make.

This theory is simply a method to develop reference points and also provide a sense of how early or extended a trend is at any given time.

The angle of the 50 simple moving average (SMA) is used as the trend indicator and does just that — it indicates. In this methodology, a trend isn't confirmed until three full waves are completed.

Some traders may argue that you don’t know whether you have a trend until after the fact. They’re exactly right. Trading isn’t about knowing the future. It’s about looking at the indications (evidence) available at the time and using them to determine when you have a probability scenario that favors you entering a successful trade.

When you understand that the very nature of a probability implies that any given trade won’t always work out the way you want, it becomes clear that the risk-management techniques of using stops, hedging, and money management are paramount to your trading success.

Trading is an inherently risky profession. You don’t want to make it even riskier by working with trading rules and principles that are subjective and open to interpretation.

The term cycles references highs and lows the market makes as it oscillates during its longer-term moves into the future, up, down, or sideways. The way cycles are measured is very specific and measurable based on objective mathematical rules.

To measure cycles, use the stochastic indicator, but change the default settings:

The figure illustrates how to identify cycle highs and lows, using this method. 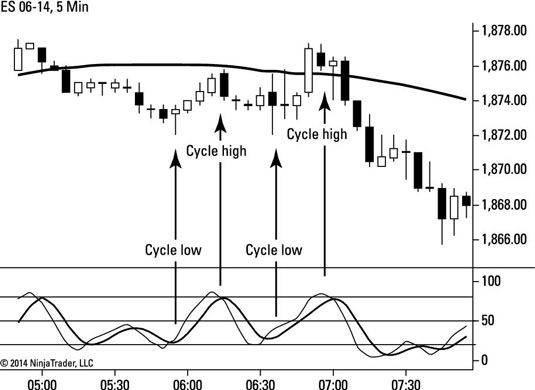 Cycles and waves are different but related. Cycles differ from waves in that cycle highs can be higher, lower, or equal to previous cycle highs in an uptrend. However, a high is considered a wave high only if it’s higher than the previous wave high. In this way, every wave high is a cycle high, but not every cycle high is a wave high.

With the wave theory, you measure waves in an uptrend, using the following rules: