By: Paul Mladjenovic and
Updated: 05-13-2020
From The Book: Stock Investing For Dummies 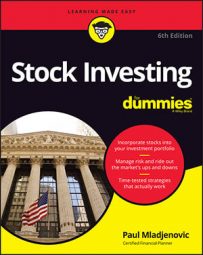 Explore Book Buy On Amazon
Stock investing doesn’t happen in a vacuum. The stock market can face major events that can either help or hurt it — and of course affect your stock portfolio. Some events can have a direct impact (such as a pandemic), while others just provide a glancing blow. But most macro-events have a material effect on stocks.

Invest in quality, dividend-paying stocks for the long term, which (in the past) have overcome the occasional crisis or crash. This article gives you the scoop on potential challenges that the stock market may face during the next decade.

The biggest point about stock investing is that it can be a fantastic bulwark in your finances to cement your future financial security. Many people feel the same way about pensions. Most pensions have stocks and stock-related investments (such as mutual funds) in their portfolios. The problem is that many (most?) pensions are underfunded and/or undercapitalized, so the risk of a shortfall (more money leaving pensions during the retirement years versus going in) is a real and present danger. 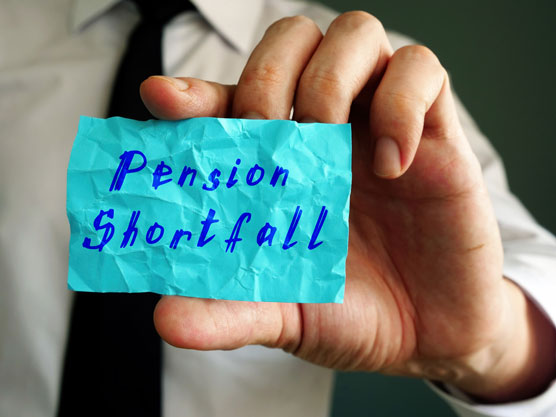 Depending on whose research you are reading, the shortfall is a minimum of $1.5 trillion and is likely much, much more (double or triple that figure). So, speaking to your pension administrator about the financial health of your pension amount is a necessity. I personally believe that people should do some stock investing outside their pension plans for diversification and focus on income stocks (dividend payers).

The European Union fostered a bureaucratic setup that is the calm before the storm. A batch of countries there decided to open the floodgates to millions of immigrants, which has caused a massive spike in crime along with exploding public assistance and national security costs. With soaring violence and related socio-economic problems, this has caused a significant drop in tourism while spiking government costs and debt.

Given this, countries such as Sweden and Greece are trending toward financial crisis and major economic difficulties. Stock investors shouldn’t wait for a crisis before acting; it’s time to reduce your exposure to European stock markets since those stocks will be at great risk.

The Bond and Debt Bubble

In recent years, interest rates in the United States (and elsewhere) have reached a historic low. Unfortunately, this has helped to fuel a historic bond bubble that dwarfs the bond bubble of 2006–2007 (which led to the 2008–2009 market crash and recession).

Given that, the current bond bubble will be much more problematic since it is much bigger by trillions and it is a worldwide phenomenon. The question is not if it will pop but when — and what the repercussions will be. What can a stock investor do?

First, start thinking about what companies and industries will be hit the worst. Companies tied to excessive debt — either having too much or lending too much — will be at greatest risk. Therefore, review your stock choices and start removing debt-laden companies and reducing your exposure to financial stocks such as banks and mortgage companies.

The driving demographic considerations 10–15 years or so ago were baby boomers along with their needs and spending patterns, but that group has been supplanted by — drum roll, please — millennials! Millennials are definitely a different category with very different spending habits and financial concerns. They are less interested in luxuries and walk-in retail spending, while they love their technology and online shopping.

These changes mean new pitfalls and opportunities that stock investors need to pay attention to. Given that, start doing some research online about millennials and their financial habits so that you can adjust your portfolios accordingly.

During 2019, the U.S. federal government’s national debt rocketed past the $23 trillion level. Politicians wring their hands about this mind-boggling debt during campaign season but quickly go back to spending mode (increasing the national debt) after election day. This monumental debt has been growing for decades, and many folks and politicians have been lulled to a point of ignoring it or just shrugging it off. However, some rumblings and milestones could take this issue from dormancy to our TV screens in the coming years.

Our total debt now exceeds 100 percent of our gross domestic product (GDP), which means we may be entering a period where carrying this total debt is not sustainable. In addition, much of this debt is held as bonds across the globe and by governments that are not friendly toward the United States, and this debt could easily be re-patriated to the United States. It is uncertain what dangers would arise since other factors could come into play as well (war, trade embargos, and so forth), but these developments could cause major stock market declines and gyrations as investors panic.

I don’t know what our political and economic conditions will be when that happens, but it is probably safe to say that quality companies with good fundamentals offering needed products and services will weather the storm, which means if you stay focused on a company’s quality and profitability, you’ll get through okay. (If not, make sure you have an adequate supply of soup cans and precious metals.)

You have heard for decades about how problematic the multi-trillion-dollar imbalances in Social Security spending have been, but nothing has seemed to materialize in recent years. What gives here? According to both public and private Social Security watchdogs, the full unfunded liabilities for Social Security exceed $50 trillion, and we have entered a period where current outflows (payments to beneficiaries) will exceed the current inflows (social security taxes). I think that if you are on Social Security now, you should be okay, but future beneficiaries may be at risk during 2025–2035 as shortfalls become more problematic.

Whenever I am doing retirement planning with folks, every chance I get, I plan without imputing Social Security income in the numbers. Why? Because if my client (or you, dear reader) can achieve financial independence without Social Security, then of course any Social Security money you receive is a nice plus! Given that, start loading up on quality dividend-paying stocks as part of your overall wealth-building approach and you’ll sleep better.

As I write this book, the world is generally placid in spite of all manners of issues, conflicts, and problems that plague humanity on a daily basis. Unfortunately, a single major terrorist event could easily trigger a stock market panic or be the tipping point that turns a muddled economy into the recessionary zone.

Major terrorist events are never a good thing of course, but in the singular scope of stock investing, they can cause major damage. In the wake of 9/11 back in 2001, terrorism caused a painful decline that rattled many investors and sent many a stock portfolio plummeting. In the aftermath of a terrorist event, both good and bad stocks do go down, but the good stocks do recover and typically get back on positive track afterwards while the bad stocks have their weaknesses exposed and either stay down or suffer a worse fate (such as bankruptcy).

The lesson is clear: While the world looks rosy, take that opportunity to analyze your stock positions. Get rid of the weak stocks before they go down — now! Keep the strong ones so your long-term portfolio can continue to zigzag upwards.

I could easily do a book titled Economic Collapse For Dummies, but until then I will cover all the various types of collapses in pages such as these. And the most common type of collapse is a currency collapse. In the United States, our currency is a global reserve currency that gives it strength versus other currencies since a global reserve currency is necessary for international trade. This provides some insulation from typical currency problems. But that doesn’t mean that the world is safe from a crisis coming from lesser currencies.

A currency crisis typically occurs when a currency is overproduced by that nation’s central bank. When you overproduce a currency, you tend to diminish the value of each unit. This translates into higher prices for goods and services — inflation! This makes it tougher for consumers as the currency keeps losing value. If the situation is not remedied, the currency will be in crisis and economic suffering by the public will increase.

At the time I am writing this, the currencies in Venezuela and Argentina are in crisis mode (hyper-inflation!), which is making the citizens suffer big-time in those countries. What would happen if the Euro or the yuan (China’s currency) were to become inflated and start to lose its value?

In the past 20–30 years or so, a number of crises were caused when derivatives positions imploded and caused massive losses. Some good examples of this have been the collapses of once-mighty companies such as Enron, AIG, and Bear Stearns. On a grander scale, derivatives played a major role in the housing bubble that popped in 2006–2007 and the 2008 market crash.

The top 25 U.S. banks have total derivatives exposure exceeding $204 trillion, according to the 2Q 2019 bulletin issued by the Office of the Comptroller of the Currency. Because many of these trillion-dollar derivatives positions are tied at the hip with debt markets, and debt markets are larger and more unsustainable than ever, it is only a matter of time before the next massive crisis hits. What should you do?

The main crisis will be with the banking industry, so reduce your exposure to bank and financial stocks. If you have them currently in your portfolio, monitor them and consider trailing stops.

I saved the worst for last. Socialism has caused more economic crises than any other singular economic set of policy ideas. Communism and fascism are just more logical extremes of this dangerous, fallacious ideology. Socialism (entirely or partly) has been the culprit of an extraordinary range of economic crises throughout history and includes the Great Depression, the Great Recession of 2008, and the collapse of the Soviet Union and more recently Venezuela, Zimbabwe, and scores of other ill-fated economies. So, what should stock investors know?

Stock investors should be wary when socialists take over an economy (or even an industry) and they should exit positions that are exposed to it. The United States is, fortunately, on balance a free-market capitalist economy and we can only hope it stays that way, but a recent survey indicated that a plurality of young adults are favorable toward socialism so we can only hope they learn better.

Find out more about economics and socialism.