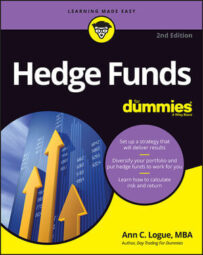 Explore Book Buy On Amazon
Hedge funds use pooled funds to focus on high-risk, high-return investments, often with a focus on shorting — so you can earn profit even when stocks fall.

The power of diversification

The easiest and most powerful way to hedge a portfolio is through diversification. Hedge funds often seek out exotic assets to increase their variety of holdings. It works because asset performance is volatile; no asset consistently beats the market.

The table below shows the top five performance asset classes over five years. Note how much the rankings change.

Hedge fund managers have many techniques to maximize return for a given level of risk. Most fund managers use a combination of the tools I present in the following list,  so keep the list handy when interviewing a potential fund manager:

Below are a few important questions to ask a hedge fund manager when researching a particular fund to help you understand what it does and how its managers work:

Mathematical explanations for the world mark modern finance, and wherever math is, you’re bound to see symbols and variables.

You don’t need to know all of the equations that shape financial theory, but you’ll have a leg up if you know the Greek letters used to describe different sources of risk and return. Keep this list handy when investigating hedge funds:

Alpha: Investment return that’s different than you’d expect, given an investment’s beta, which is its exposure to market risk and return. In the hedge-fund world, alpha is used to describe the value that the fund manager adds and the extra return generated for the amount of risk that the fund takes.

But remember, alpha can be negative, meaning that the fund manager subtracts value from the fund. Some researchers aren’t sure that alpha exists at all.

Gamma: The rate of change in delta. Gamma is exposure to any change in price, positive or negative.

Ann C. Logue is a freelance writer and consulting analyst. She has written for Barron’s, the New York Times, Newsweek Japan, Compliance Week, and the International Monetary Fund. She’s a lecturer at the Liautaud Graduate School of Business at the University of Illinois at Chicago. Her current career follows 12 years of experience as an investment analyst. She has a BA from Northwestern University, an MBA from the University of Chicago, and she holds the Chartered Financial Analyst designation.