How to Use the Stochastic Oscillator to Interpret Trading Price

When looking at trading price momentum indicators, two relationships are particularly important: The high-low range over x number of days, and the relationship of the close to the high or the low over the same x number of days. If you use the low, the resulting indicator is named the stochastic oscillator.

Step 1: Putting a number to the fast stochastic %K

The %K indicator shows you how much energy the price move has relative to the range. If today the closing price is higher than it was yesterday, it’s farther away from the lowest low than it was yesterday, too. If neither day put in a new high or low, the high-low range usually remains the same. Arithmetically, therefore, today’s %K is a higher number than yesterday’s, and the line on the chart has to rise:

So far, you just have one line in the indicator. What you really want is some kind of crossover guideline to tell you whether to buy or sell, so you don’t have to guess by eye. In the stochastic oscillator, the crossover line is named %D and is formed by a short-term simple moving average of %K. A moving average always smoothes and slows down the price series, so %D is sometimes called the smoothed indicator as well as the “slow” indicator. When you put the two indicator lines together, you get crossovers of the first indicator line by the smoothed shorter-term indicator line that give you exact buy/sell signals.

You can calculate %D with the following formula:

When %K crosses above %D, it’s a buy signal, and the other way around for a sell signal. And as with any indicator, you can change the number of days in the lookback period.

Fiddling with the stochastic oscillator on the chart 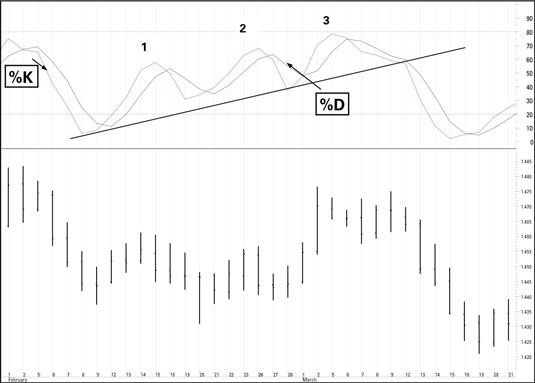 Here, the stochastic oscillator shows a series of three higher highs in the indicator that have %D rising over %K in “right” crossovers (to the right-hand side of the peak), implying hidden power is in the up move on the left-hand side of the chart that cannot be discerned from just looking at the prices themselves.

But look again. Under the first bump up in the stochastic, only two days have lower closes (and one duplicate close). You could also draw a support line under the lower closes. As it happens, this time, the final downside crossover beats the break of the support line by five days, but that’s not always the case. 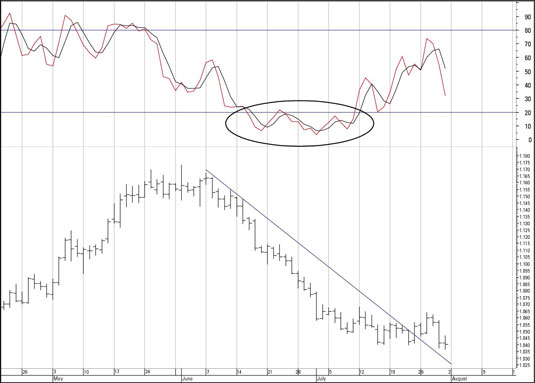