Energy investors should know that America is the country that made coal king. Coal from Southern and Midwestern states is what helped build the strongest economy in the world. Some of the companies that made that possible are still around and are still solid investments.

Here's a look at some of the major coal mining companies:

American coal miners have been through a tough slog. Cheap natural gas and oppressive EPA regulations made most investors sell U.S. coal over the past few years, with the major players down more than 50 percent since 2008, as seen in this figure. Since late 2012, some of those stocks have shown signs of appreciation. 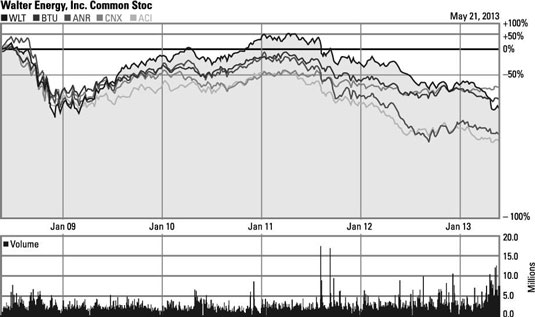 In the final quarter of 2012, Peabody, Alpha Natural Resources, CONSOL Energy, and Arch Coal all beat the earnings expectations of analysts. And other than Arch Coal, the other companies registered better-than-expected revenue for the quarter. This table shows earnings per share (EPS) and revenue beat for these companies for the fourth quarter (4Q) of 2012.