Energy Sectors and Markets for Investors

Oil in all its forms accounts for one third of global energy consumption. This includes crude oil, shale oil, oil sands, and the liquid content of natural gas, called natural gas liquids, or NGLs. As a result of including these different forms, you sometimes see different numbers depending on the source and whether it’s reporting just crude oil or total liquids.

Oil is traded by the barrel, which contains 42 gallons. The common unit used for oil is thousand barrels per day, abbreviated tb/d. This table shows world oil consumption and production in multiple units.

Natural gas accounts for just under one-quarter of global energy consumption. You can measure natural gas by volume, usually in cubic meters or feet, or by the amount of heat it can produce in therms, or British thermal units (Btus). This table shows how these units relate to each other.

Because such large quantities of natural gas are needed and produced, you commonly come across units for thousands, millions, or billions of cubic feet and Btus. You can simplify them like this:

In 2011, the world produced 115.7 trillion cubic feet of natural gas and consumed 113.8 Tcf. Unlike oil, more natural gas was produced than consumed, which is why natural gas prices were near-record lows in 2011 and 2012, while oil prices hovered near all-time highs. Natural gas is traded in million British thermal units (MMBtu).

Coal provides 30 percent of global energy needs, and in 2011, it was the fastest-growing form of fossil fuel energy. The world produced 7,678 million tonnes (Mt) of coal and consumed 7,217 Mt.

Not all coal is created equal. The most common type, bituminous coal, provides between 10,000 Btus and 15,000 Btus per pound. Coal that generates more heat per pound fetches higher prices.

Instead of burning fuel to produce steam, nuclear energy produces heat to create steam by controlling the continuous fission of uranium atoms. In 2011, nuclear energy generated more than 2,600 billion kilowatt-hours of electricity, or 4.9 percent of global primary energy production, requiring nearly 68,000 tonnes of uranium. As of 2013, 435 nuclear reactors were operating in the world, with 65 under construction and 167 planned.

Uranium is traded in contracts of 250 pounds. Prices ranged from $10 to $135 per pound between 2003 and 2013. As with all nonrenewable fuels, you can trade the commodity directly or invest in companies that produce it.

Hydroelectricity and other renewables

Renewable resources don’t require a finite source of fuel to produce energy. Instead, naturally occurring sources are captured and converted into usable forms of energy. The power of rivers and wind can spin turbines, heat from the earth’s core can make steam, and the sun’s rays can be converted into electricity.

You can invest in this type of energy by buying the companies that make the necessary equipment, like solar panels and wind turbines, or the utilities that use them. 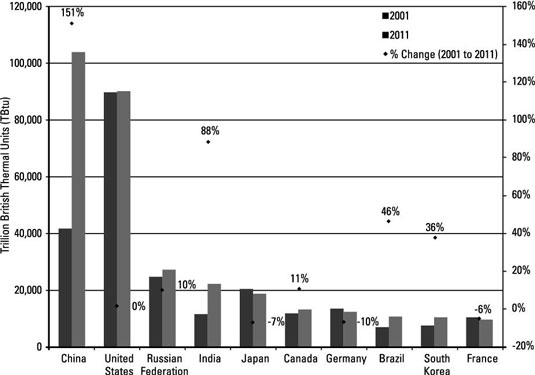 Currently, all net growth in energy consumption is coming from emerging economies. Consumption in developed nations has actually declined over these past few recessionary years. China alone accounted for 71 percent of global energy consumption growth in 2011. This table shows regional markets for all sources of energy.