Energy investors find that it is impossible to have a discussion about national oil companies (NOCs) without shining a light on OPEC. By the end of 2011, more than 80 percent of the world’s proven oil reserves rested in the hands of the 12-member oil cartel.

The ten largest NOCs are in OPEC. Only one of them, however, holds all the cards: Saudi Arabia. This figure breaks down OPEC reserves by individual members. 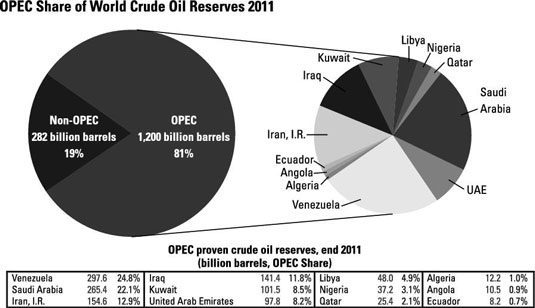 Saudi Arabia’s Ghawar oil field is the largest of its kind. Considered a super-giant oil field, Ghawar pumps out a monstrous 5 million barrels per day and has been in production for more than 60 years.

Four of the top ten oil-producing countries in the world are OPEC members — Saudi Arabia with 10.5 MMbbls/d, Iran with 4.2 MMbbls/d, United Arab Emirates with 2.8 MMbbls/d, and Nigeria with 2.4 MMbbls/d. Because OPEC members raise and lower their production targets and quotas based on the current supply and demand, the amount of spare capacity has become a major issue.

Spare capacity refers to the ability of a country to produce more oil. Basically, will OPEC be able to increase production in the event of a supply constraint?

This is a more serious problem for OPEC than you may first think because the only member with significant spare capacity is Saudi Arabia. In the event of a supply constraint, the entire world is relying solely on Saudi Arabia to turn on the taps and pick up the slack. Failure to do so would result in a spike in oil prices.

Although you can’t directly trade state-owned oil companies in OPEC like Saudi Aramco, the 12-member cartel can provide vital information and greatly influence global oil markets. Periodic meetings can swing oil prices in both directions depending on any changes in production.

Don’t confuse government-owned national oil companies with multi-national corporations, which are simply companies that operate in more than one country.