How to Interpret the Simple Moving Average on a Trading Chart 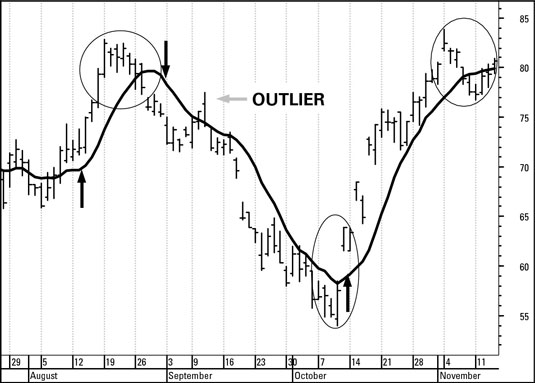 Right off the bat, you can see that the moving average clings to the prices and represents their movements better than a straight line and, at the same time, smoothes away the occasional erratic price. You almost stop seeing price variations after you draw the moving average on a chart.

If you use the crossover rule to buy and sell a security every time the close crosses the moving average, you get a lot of buy/sell signals that reverse in fairly short order. In the preceding figure, you don’t know at the time it’s happening that the outliers are abnormal. For all you know, the crossover above the moving average is a genuine indication of a reversal. You know only after the price resumes the down move that they were outliers.

If you traded every crossover signal as shown in this table, the return is $26.09 on starting capital of $70.61, or 37 percent in less than one year. This gain is more than three times higher than simply buying at the beginning of the period and holding to the end. But in the process of trading the crossovers, you take two losses caused by the outliers.